This meme was started by Jill over at Breaking the Spine. It tells everyone about the not-yet-released books you are most looking forward too. Summary from Amazon. 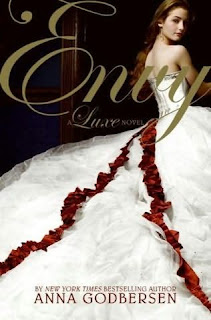 Envy: A Luxe Novel - Anna Godbersen
Jealous whispers.
Old rivalries.
New betrayals.
Two months after Elizabeth Holland's dramatic homecoming, Manhattan eagerly awaits her return to the pinnacle of society. When Elizabeth refuses to rejoin her sister Diana's side, however, those watching New York's favorite family begin to suspect that all is not as it seems behind the stately doors of No. 17 Gramercy Park South.
Farther uptown, Henry and Penelope Schoonmaker are the city's most celebrated couple. But despite the glittering diamond ring on Penelope's finger, the newlyweds share little more than scorn for each other. And while the newspapers call Penelope's social-climbing best friend, Carolina Broad, an heiress, her fortune—and her fame—are anything but secure, especially now that one of society's darlings is slipping tales to the eager press.
In this next thrilling installment of Anna Godbersen's bestselling Luxe series, Manhattan's most envied residents appear to have everything they desire: Wealth. Beauty. Happiness. But sometimes the most practiced smiles hide the most scandalous secrets. . . .
Release Date: 7th May 2009 (UK)
I haven't done a Waiting on Wednesday post for a while and it's taking me ages to read Inkspell so here it is! I loved the first two books in this series so I'm really excited for this. The covers for this series are completely gorgeous as well.
Sophie
Posted by So Many Books, So Little Time at 12:01
Email ThisBlogThis!Share to TwitterShare to FacebookShare to Pinterest