In My Mailbox XI

This was started by the amazing The Story Siren who was inspired by Alea. If you want more information check out her blog. All summaries are from the book jackets.

Lock and Key - Sarah Dessen
Ruby Cooper likes to expect the worst. That way, she’s never disappointed.
Abandoned by her mother and forced to leave the house she calls home, Ruby is facing too many changes. her world has been transformed into a life of luxury by her long-lost sister, but all Ruby wants to do is leave - she can make it on her own. Even Nate, the gorgeous boy next door, can’t seem to change her mind. Will Ruby finally realise first impressions don’t always count? And that sometimes, people can surprise you, so it’s OK to let the closest ones in…
Sarah Dessen is a genius. Here is my review.

Dreamland - Sarah Dessen
Unable to deal with the family fall out when her elder sister runs away from home, Caitlin finds herself withdrawing into a private world. A dream world where everything - and everyone - can be kept at arms length. And a place where her damaging relationship with her boyfriend, Rogerson, need never be faced up to or discussed…
This is out of print here in the UK so I was very pleased to finally get my hands on a copy. 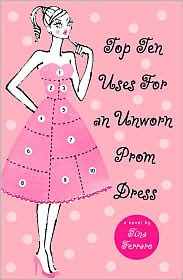 Top Ten Uses for an Unworn Prom Dress - Tina Ferraro (Signed!)
Sophomore year, Nicolette Antonovich was dumped two days before prom by the hottest guy at school - Rod “Rascal” Pasqual. As a result, she became the proud owner of one unworn, perfectly magical pink vintage dress. And she got to stare at it all evening long as a reminder.
But Nic is determined to put that night behind her for good. She’s a junior now - older, wiser, and completely over-whelmed by a new set of problems: 1. The bank’s ready to foreclose her childhood home. 2. Her father’s too busy with his “replacement” daughter to care. 3. Her best friend’s brother is an eternal thorn in her side. 4. Her best friend isn’t exactly the rose attached to that thorn in her side. 5. Rumours are flying around school that could get her kicked off the volleyball team, which would 6. Ruin all chances of a college scholarship. 7. She still likes the guy who dumped her in the first place. And 8. What in the world do you do with an unworn prom dress, anyway?
Strangely, it’s getting to the bottom of this last dilemma that just might hold the answer to all Nic’s problems.
Tina sent me a copy of this and it's signed! My first ever signed book! I was so excited.

The Love Curse of the Rumbaughs - Jack Gantos
Everyone loves their mother. But what happens when you love her so much you can’t bear to let her go - ever? That’s the sign of the Love Curse. And Ivy’s got it…bad.
This sounds really odd, but the cover is really cool.

Parasite Positive - Scott Westerfeld
One year ago, Cal Thompson was a college freshman more interested in meeting girls and partying in New York City than in attending class. Then he met a girl called Morgan, they had a fun night together and she passed on a parasite that turns people into ravenous vampires. You know how it goes.
Cal himself is only a carrier, but he’s infected the girlfriends he’s had since Morgan, and it’s now his job to hunt them down before they can create even more of their kind.
Because I loved the Uglies quartet I thought that I should try some of Scot Westerfeld's other stuff. I hope I won't be disappointed!

Meet Me at the Boathouse - Suzanne Bugler
Louise knows that Danny loves her more than anyone ever could. It isn’t his fault he gets things mixed up sometimes…
It doesn’t mean he’s a liar.
Then something terrible happens, and all the good things melt away. Louise and Danny are hanging out with dodgy people, doing things that aren’t right. Danny isn’t exciting anymore…he’s weird, and he’s starting to scare her.
Could everyone else have been right all along?

Ink Exchange - Melissa Marr
Images cluttered the page, but one tattoo set her nerves on edge: inky-black eyes surrounded by wings like shadows coalescing.
Mine. The need was overpowering. Leslie looked up. “This one,” she said. “I need this one.”
But the image is more than just tempting art, and it draws Leslie into a world of shadows and desire - into the world of Faerie.
I can't wait to read this; I absolutely loved Wicked Lovely. I ended up with two copies by accident so I've got to wait until April 20th to get the return form from Amazon at school because we have no ink. It's so frustrating!
I had a really good week this week. I've tried to stop buying books but I just can't. I'm weak!
Sophie
Posted by So Many Books, So Little Time at 12:33
Email ThisBlogThis!Share to TwitterShare to FacebookShare to Pinterest