Sharon Dogar is the British young adult author of Waves (2007) and Falling out earlier this month, both published by Chicken House. Sharon has been writing stories since she can remember. 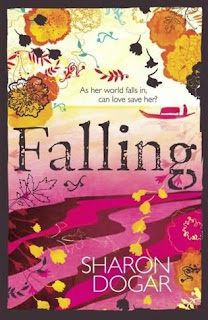 1. Tell us a bit about Falling.
Falling started (as do most of my books) with an image. I saw a girl at a bus stop. An Asian girl, and was arrested by her sense of otherness from the world around her. The image returned and I found it haunting me. Then my father told me a story (as he often does) about his village back home, and a midwife/healer who was loved and loathed in equal measure. Somehow the two became entwined. Finally, I met an old friend and we began laughing about living on the council estate many years ago. We recalled a startling incident of racism. As I walked home the story clicked, I had all three elements and the words began running through my head, all I had to do now was catch them and give them shape. It took two years.
2. What made you decide to link Neesh and Sammy’s story with Jake and Farida's?
I linked the two stories in an attempt to explore what has and hasn't changed over the years. I think we all have a primal instinct to exclude others and keep ourselves safe within the social fold. There is no shame in this instinct, it's there to protect us from wild animals - but there is a shame in allowing it to take us over and be the thing that gives our lives meaning. I wanted to look at what this meant during colonial India and what it might mean now, in the twenty first century. It's a common perception amongst young, educated middle-class adults that racism doesn't really exist anymore. It does. And it's increasing everyday, especially with the rise of fundamentalist Islam and the growth in Eastern European immigrants coming to the UK.
3. None of the horrible events described in the novel were sugar coated in Falling. Was this your intention?
I don't see any point in pretending that horrible things don't happen. They do. Or in pretending that difficult, painful situations can always be endured, sometimes they can't be. I hate the way some writers pretend to young adults. I don't mean by creating other worlds, that can be a really fascinating way of exploring ideas (Malorie Blackman) but by pandering to their fantasies : E.g. everyone and anyone can be famous/all you need is love/all things can be conquered! On the other hand I do powerfully believe that with the right combination of circumstances, luck and judgement most things can be understood and lived with. So yes, I suppose it was my intention - although I didn't know that until I was asked this question!
4. The harsh reality of the cultural differences in interracial relationships wasn’t shied away from. Is this something you feel strongly about?
As you can probably tell by now, I feel very strongly about racism. I worry about where the lessons for this generation will come from. It feels a long way now from the second world war, which taught my generation about the horror and consequences of unbridled racism. However, I take great comfort from most of the young people I meet. They are almost invariably thoughtful and interesting about race and what it means. The problem is, that it isn't usually readers that are the problem. How do we reach the children that are disenfranchised and angry and want someone to blame - children like Kef? If you can think of a way tell me. 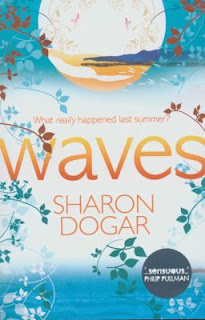 5. You blended romance and suspense in both Falling and Waves to make thrilling novels. Was there a reason for this?
No, this is just the way stories seem to come out of me. It's quite frustrating sometimes, a bit like always wanting straight hair when you've got curly, or vice versa. I wish I could write like someone else, preferably someone who writes best sellers, but there you go, I write like me, and I'm very grateful that some people like it.
6. If you could have lunch with any three authors, living or dead, who would they be and why?
What a question! I know I'm going to answer this and then change my mind and wish I could have another go. The truth is that it changes all the time.
Harper Lee - because she has written an almost perfect book for the reader. It's like a master class in how to do it, and I'd want to ask her how, and I'd want to ask her what she feels now about having so idealised her father (in Atticus) that it's made it difficult for mere mortal fathers to ever get it right.
Anne Frank - because wouldn't it be wonderful to tell her just what she has achieved and listen to her thoughts about it all in retrospect.
Primo Levi - because I've been re-reading all his books and I'd like to sit at his feet and actually hear his voice and really know how he managed to survive such terrible experiences and continue to be able to think about them in such a fruitful and elegant way.
7. Do you have a particular time or place that you do your best writing in?
Yes. I write in my kitchen mostly, in the mornings. When I'm stuck I sometimes go to cafes. When I edit I often go to the Bodleian in Oxford, it's very quiet and warm and beautiful and somehow helps me to structure things. I'm very lucky.
8. Are you working on anything at the moment? Can you tell us anything about it?
I've just finished the first draft to my third novel. It's a very different endeavour this time, based on a true story. It's been amazing having to research and write about real people. It's a different way of imagining, carrying more responsibility, but it's exactly the same in that the characters still have to come alive for you. You have to feel as though they are actually speaking to you - and that is quite an odd experience when you know that they've really existed.
Thank you very much, Sharon. You can see my review of Falling here. I cannot recommend this, along with Sharon’s debut novel Waves, enough. You should all get your hands on a copy and read them immediately!
Sophie
Posted by So Many Books, So Little Time at 15:08
Email ThisBlogThis!Share to TwitterShare to FacebookShare to Pinterest