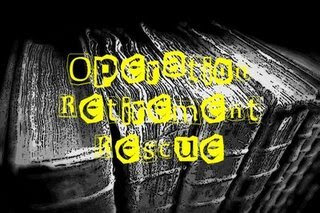 Due to all the talk about ARC's this week, Adele from Persnickety Snark came up with a great idea. Operation Retirement Rescue is a way for bloggers to remember and celebrate old YA classics. All you have to do is:
Before May begins post reviews for 1-2 YA titles that -
1) were published more than five years ago,
2) hold fond memories, and
3) post the icon somewhere in your review.

Angus, Thongs and Full-Frontal Snogging - Louise Rennison
There are six things wrong with my life:
1. I have one of those under-the-skin spots that will never come to a head but will lurk in a red way for the next two years.
2. It is on my nose.
3. I have a three-year-old sister who may have peed somewhere in my room.
4. In fourteen days the summer hols will be oer and then it will be back to Stalag 14 and Oberführer Frau Simpson and her bunch of sadistic teachers.
5. I am very ugly and need to go to an ugly home.
6. I went to a party dressed as a stuffed olive.

Angus... was published in 1999 by Scholastic and later by HarperCollins in 2005.

Louise Rennison's Georgia Nicolson series were the books that introduced me to YA fiction when I was around eleven and are still among my favourites nearly six years later.
I was purely a Jacqueline Wilson girl before I was thrown into Georgia's world, head first and laughing my ass off I might add. The first four were already published when I discovered them and for four weekends in a row I bought the next book with my pocket money. Since then, I've bought all of them in hardback on the day that the are released.
From these books I've read YA non-stop and they were the best introduction to the genre that I could have possibly been given. I mean who doesn't love a girl who goes to a party dressed as a stuffed olive?
The tenth and final of Georgia's diaries will be released in the UK 25th June and 1st October in the US. There's no title or cover for it yet though. It's all very hush-hush!
Sophie
Posted by So Many Books, So Little Time at 14:04
Email ThisBlogThis!Share to TwitterShare to FacebookShare to Pinterest