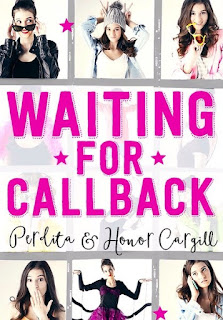 Waiting for Callback bounces into the world of contemporary YA with a funny, charming heroine and a behind the scenes glimpse of acting. I really, really enjoyed it.

Perdita and Honor blend the acting world and the world of a 15-year-old girl battling spots, her mum and exams perfectly. I loved experiencing the gritty reality of starting out as an actor – it was rather eye-opening! The only other experiences of acting I've read about are flashy movie stars in contemporary fiction or glossy American TV shows so it was really interesting, actually. I especially liked the pressure it put on Elektra, the surprising dinginess of locations and how agonising the constant waiting was for her. It made it seem like an actual job as well as enforcing just how much Elektra enjoys it: you’d have to in order to put yourself through everything she does in Waiting for Callback!

But I mostly loved reading about Elektra’s everyday life. What can I say, I'm a contemp YA girl! I love the friction a new boy on the scene causes best friends like Elektra and Moss, the agony of dissecting what two kisses on a text from the boy you’re crushing on really means (does that ever stop, btw? Maybe when you’re married and he can't get away any more?) and the sheer annoyance of parents at times. It brings everything I loved (now in retrospect, of course) and loathed about being a teenager. I did actually find Elektra’s mum a tad irritating, though; she has no life outside of Elektra! But she also rang very honestly in her worrying, wanting her daughter to do her best and wanting to do the best for her.

I thoroughly enjoyed Waiting for Callback and I'm already looking forward to the next instalment.