8 Things I Loved About Front Lines by Michael Grant 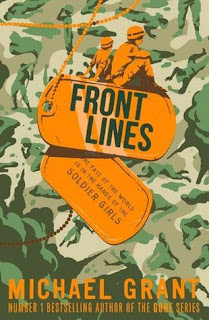 1. It’s really interesting to read about WWII from an American perspective, even if it’s an alternate version of the war. I must have studied WWII at least 5 separate times during my schooling and, obviously, we only really focused on the European side of things. It’s fascinating.

2. It really made me laugh at first that the Americans insisted that they’d enter the war (they didn’t join until two years in in 1941) and their prowess and numbers would end it all and they'd be home by Christmas – the same things the English thought when the war started! It was interesting to see them realise how big a war they were fighting, the realisation that they and their friends might not make it home, and the blind trust they were giving their superiors to try and keep them alive. It was rather sobering and a very powerful thing for the characters to realise.

3. Front Lines delivers effortlessly on diversity in our heroines (it’s a three-way split narrative between Rainy, Frangie and Rio) and in the supporting characters. There’s diversity in religion, race and social position and it’s so, so welcome. THIS is how you paint a realistic portrait of our world.

4. The sexism and racism that the Soldier Girls experience is powerful, shocking and scary. Set in 1942, both of these things are accepted as how it is, but that makes it even more potent in my opinion. It was making me angry and every time one of the characters had a little victory I virtually cheered. There’s a point raised by one of the characters that boils down to this: we’re fighting a war against white supremacists with a segregated army. Takes you aback, huh?

5. This felt a lot slower than the other books I've read by Michael Grant, but I think it’s purposeful. He takes the time to set the scene and build the characters into soldiers and it gives them a really interesting journey and I was emotionally attached to them by the time they reached the war. I loved having the time to compare the journeys of the girls and see how they differed, came together and diverged. Front Lines is very much more character driven that the books in the Gone series and Messenger of Fear.

6. And what characters they are! The journey that Rainy, Rio and Frangie go on throughout Front Lines is huge. They turn from innocent girls to soldiers who have seen many, many horrors, but they also overcome so many things to get to where they are, namely their race and gender. Though it was often sad and horrific, it was interesting to see them go on that journey and become strong, respected (sometimes) women.

7. It was really cool to see the girls finally come together in the same place. Isn’t there a saying that goes: ‘War is the great equaliser’? Or am I making that up? It didn’t matter that Frangie, Rio and Rainy all went in different directions in their army career, that they started in different places and will end up in different places after the war, on the front lines, they’re all soldiers.

8. The stories of the girls in Front Lines is told by a mystery narrator who is writing everything down from an army medical centre as the war is coming to an end. We don’t know if she's one of the main characters, someone we’ve met, or someone completely unrelated to what we’re reading. We just know that she’s experienced what our heroines have – she's a Soldier Girl, too.

1942. The fate of the world rests on a knife edge. And the soldiers who can tip the balance…are girls.

Set in an alternate World War II where young women are called up to fight alongside men, this is the story of Rio Richlin and her friends as they go into battle against Hitler’s forces.

But not everyone believes they should be on the front lines. Now Rio and her friends must fight not only to survive, but to prove their courage and ingenuity. Because the fate of the world is in the hands of the soldier girls.


Sophie
Posted by So Many Books, So Little Time at 16:14
Email ThisBlogThis!Share to TwitterShare to FacebookShare to Pinterest