Rebel of the Sands, Alwyn Hamilton 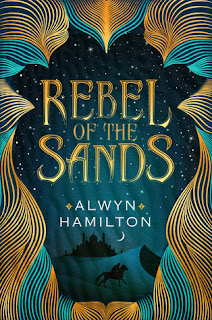 ‘Have you ever wanted something so bad that it's not a want anymore? I need to get out of this town like I need to breathe.’

Dustwalk is an unforgiving, dead-end town. It's not the place to be poor or orphaned or female. And yet it's the only home Amani Al’Hiza has ever known – the desert is in her bones.

Amani wants to move on, escape, to see the world she's heard about in campfire stories. More than a want. A need.

Then a foreigner with no name turns up and saves her life. Tell me how you want your story to go, he says, and we’ll write it straight across the sand. With him she has the chance to run.

But the desert plains are full of danger, blood and magic. The sultan’s army is on the rise and soon Amani finds herself caught at the heart of a fearless rebellion…

I feel like I've been being teased with how amazing Rebel of the Sands is for at least a year now, so when I finally picked it up I was a little nervous. But it was excellent!

The combination of a Wild West/Middle Eastern set-up in a world recognizable as our own but with magic and djinnis is just as wonderful as it sounds. I was captivated by the depth of the world building. The mythology, the religions, the origin stories, the magic, the creatures – everything is touched upon and explained in a way that really can only be described as magic. I was enthralled.

I don’t think I've ever come across djinnis in YA before, and maybe only once in adult fiction, but I really loved the mystical side to the magic they brought to the novel, as well as the potential for half-djinnis and the scary cool powers they can have. It was cool how they were tied into the origins of the world and how the modernisation of it (though not in a way we’d called modern!) brought about their downfall. It’s so interesting that I'd be happy to just read from Alwyn Hamilton’s notes about the world building and how she worked out all of the connections and crossovers. She's a very creative lady.

And Amani was quite a character to follow through this world. She’s just badass. I loved that her mouth fired off sarcasm and inflammatory comments in a way that nearly got her killed multiple times; her being the best shot most people have seen in a while; her impulsive recklessness; and her loyalty, when she found somewhere to place it. I just loved here, and from the first pages as well. Rebel of the Sands really does open with a bang. You’d be hard pressed to put it down after that!

Rebel of the Sands is an enthralling debut that crosses genres, makes your heart beat faster and your breath hitch with swooning and excitement. So when can I have book two?

Thanks to Faber for the review copy.