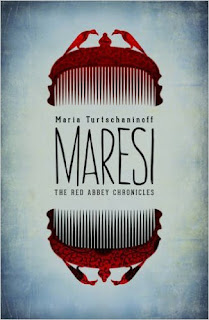 A world where girls live in fear.
A safe haven far away.
But is it far enough?

Maresi came to the Red Abbey when she was thirteen, in the Hunger Winter. Before then, she had only heard rumours of its existence in secret folk tales. In a world where girls aren’t allowed to learn or do as they please, an island inhabited solely by women sounded like a fantasy. But now Maresi is here, and she knows it is real. She is safe.

Then one day Jai – tangled fair hair, clothes stiff with dirt, scars on her back – arrives on a ship. She has fled to the island to escae terrible danger and unimaginable cruelty.

And the men who hurt her will stop at nothing to find her. Now the women and girls of the Red Abbey must use all their powers and ancient knowledge to combat the forces that wish to destroy them. And Maresi, haunted by her own nightmares, must confront her very deepest, darkest fears.

Ever since the first gorgeous proofs of this Finnish feminist fantasy novel arrived on the doorstops of bloggers, I've been hearing rave reviews. Happily, I loved Maresi just as much as they did.

Red Abbey is a place of refuge and education for the girls of Maresi’s world. In a place where women and girls are ruled over by their fathers, brothers and husbands; refused the right of knowledge; and families choose to send away a daughter instead of seeing her starve, Red Abbey provides for them. It's a fascinating world and I quickly became drawn to the inner workings of the Abbey and their belief system that felt ancient and spiritual. Led by Mother and Sisters, who are fed their knowledge by the First Mother, goddesses and ancient texts, it felt magical. It's a quiet world and setting for a fantasy novel, but an absorbing and intricate one.

Men are forbidden to land on the island and the buildings are sacred. Red Abbey is a sanctuary for women vilified by the men in the outside world and gives them everything they were deprived of in their life before becoming a novice at the Abbey. It’s a fiercely feminist novel, but in a way that young readers of Maresi are going to take in and take on board without ever noticing. The messages are powerful in their simplicity and it is never patronising or condescending.

Maresi moves slowly in the beginning, taking great care with establishing the Abbey and what life is like there for the women and girls and introducing Jai, a new novice so damaged by abuse that she rarely leaves Maresi’s side. As jai becomes more at home in the Abbey the tension slowly builds and Maresi, as she writes the story that begins with Jai’s arrival to be recorded forever within the Abbey’s library, starts to drip feed ouffhand comments about the aftermath of what's to come. I love the perspective that comes from telling a story like this; it feels at once familiar, exciting and filled with anticipation and it meant that I read Maresi in only two sittings, racing through the final quarter of the novel at breakneck pace, desperate to find out what happened.

Maresi is an immersive, exciting and original start to a series that will pull in even those unsure of fantasy. I can't wait for book two.

Thanks to Pushkin Press for the review copy.