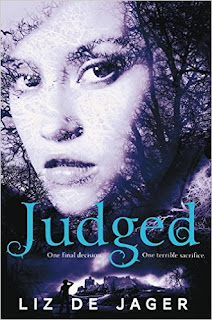 Other Titles by this Author: Banished, Vowed

It feels like I've waited forever to see how Kit’s adventures conclude, but boy was Judged worth the wait.

Kit is still suffering from the dramatic showdown at the end of Vowed; she's tired, experiencing migraines and nose bleeds and she's rather worried about her magic. But quite frankly, that’s the least of her worries! I swear this girl can't walk out of her front door without nearly dying… Kit is a serious badass, though, which definitely works in her favour. Even though she was suffering, she carried on with what she needed to do, even at her own detriment. But I loved that she wasn’t stoic about it, if she was in pain, she was in pain; if she was exhausted, she was exhausted; if she was fed up, she was fed up. I love Kit. A lot.

Kit, Aiden and Dante make such an excellent trio. I love the camaraderie and support between them, but also the affectionate mocking and the willingness to walk into deadly battle alongside each other at the drop of a hat. I particularly enjoyed Aidan’s goofy, awkward attempts at flirting. Sometimes it genuinely made me laugh aloud while also making my heart smile. Speaking of smiley hearts: Thorn. I’m so glad we saw a bit more of him in Judged than we did in Vowed! I missed him. His and Kit’s relationships really developed into something strong in this book and I loved watching it unfurl.

So many threads came together in Judged and it worked seamlessly. The Glow case was getting more serious by the day; attacks on Kit, Aiden and Dante were increasing and the powers of the Otherwhere are set to destroy everything – juggling all of this could so easily have ended in a long, confusing novel with things all over the place, but I loved how they linked and crossed paths throughout the novel.

Judged is a fast-paced and all-consuming ending to a wonderful trilogy. I’m already looking forward to Liz’s next adventure.

Thanks to Tor for the review copy.