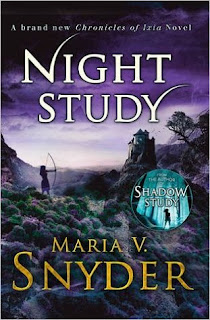 Other Titles by this Author: Poison Study, Magic Study, Fire Study, Storm Glass, Sea Glass, Spy Glass, Inside Out, Outside In, Touch of Power, Scent of Magic, Taste of Darkness, Shadow Study

Valek is determined to protect Yelena, but he's quickly running out of options. The Commander suspects that his loyalties are divided, and he’s been keeping secrets from Valek…secrets that put him, Yelena and all their friends in terrible danger. As they uncover the various layers of the Commander’s mysterious plans, they realise it's far more sinister than they could have imagined.

I was so excited to dive back in Yelena and Valek’s world and I wasn’t disappointed at all. I loved Night Study.

Synder picks the story back up very shortly after the evil cliffhanger of Shadow Study, thankfully, and started the novel on such a wonderful high note. Yelena and Valek discuss the possibility of Yelena being pregnant and how that will change everything and I was just giggling to myself in delight at Valek’s reaction.

This second trilogy, and particularly this instalment, really developed Valek far beyond anything I expected; he’s barely recognisable compared to the Commander’s assassin we met at the beginning of Poison Study. It was really lovely to see him soften and accept Yelena, Ari, Janco, Leif, Mara and Devlen as family, as well as exploring more of his thoughts towards his blood family who he hasn’t seen since he was a boy. Both he and Yelena suddenly had many complications and a whole other being on the line when they risked their lives and it really changed the game.

Once again, Night Study was written in split perspective between Yelena, Valek and Leif, but with Yelena the only one in first person, keeping her at the centre of the story which was a very clever and subtle touch. It allowed several threads of a vast story to be told at the same time, intersecting and the characters weaving together throughout without all of the information becoming too dense or confusing.

Maria V Snyder is extremely skilled at drip-feeding information and clues about the various plots and betrayals that meant I was so tense I stopped breathing a good couple of times. It was also rare to go even 100 pages before I can't see how on earth they’d get out of their current mess unscathed. Night Study in no way suffered from second book syndrome; it delivered in immense character development, plot twists galore and on point humour. I fell in love with this ragtag bunch all over again.

Maria V Snyder has created characters impossible not to love, a world I'm desperate to explore and a magic system that keeps on growing. I can't wait for the final part of Yelena and Valek’s adventure, even though I’ll be sad to see them go. Again.

Thanks to Harlequin Teen and NetGalley for the review copy.