Every year there are a handful (or several stacks) of books that I really feel like I should have got around to and vow to finally read in the next 12 months. Here are the five books I really, really need to read in 2016: 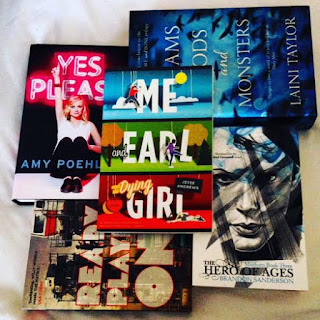 Ready Player One, Ernest Cline
Even though I bought this first, I tried to read Cline’s second novel, Armada, last year and I just couldn’t do it. I DNFed it after about 20% and it's made me really hesitant to pick this up, but I just need to bite the bullet and trust in the opinions that made me buy it in the first place.

Hero of Ages, Brandon Sanderson
Now this book is ginormous and I’m intimidated. I loved book one, The Final Empire, but book two dragged a little in the middle so I lost my push to move onto book three a little, but I've heard such wonderful things about the sequel series that begins with Alloy of Law that I know I just need to go for it. (Sidenote: The guy on this cover looks so much like Jensen Ackles it weirds me out...)

Me and Earl and the Dying Girl, Jesse Andrews
I bought a copy of this while I was in New York last Spring as I was excited about the movie and never got around to it. But then I didn’t read it in time and never got to see it. I've pre-ordered the DVD now though so I have to read it!

Yes Please, Amy Poehler
I bought a lovely hardcover copy of this not long after it came out and every time I pick up a non-fiction book I consider it, but then I pick something else instead! I've decided that I’ll listen to the audiobook as it's not too long and Amy herself reads it which sounds wonderful to me!

Dreams of Gods and Monsters, Laini Taylor
I adore this trilogy and I want to read the finale very, very badly, but I also feel like I need to re-read the first two books in the series beforehand to do it the proper justice. And that’s why I haven’t read it yet; these books are HUGE and rereading a trilogy of this size is a massive commitment, but I'm going to do it.

Which books are you determined to read in 2016?