This is Where It Ends, Marieke Nijkamp 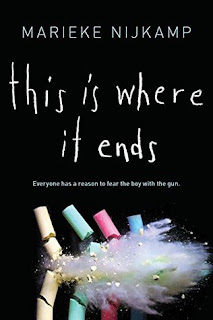 10:00am
The principal of Opportunity, Alabama’s high school finished her speech, welcoming the entire student body to a new semester and encouraging them to excel and achieve.

10:02am
The students get up the leave the auditorium for their next life.

10:03am
The auditorium doors won't open.

10:05am
Someone starts shooting.

Told over the span of 54 harrowing minutes from four different perspectives, terror reigns as one student’s calculated revenge turns into the ultimate game of survival.

I went into Marieke Nijkamp’s debut having heard a handful of my friends praising this to the stars and then a few saying it was merely okay; needless to say I was nervous about diving into This is How It Ends and I ended up with very mixed feelings.

This novel is split between four points of view, all connected in various ways, and I got rather confused, to be honest. There was so little distinction between the narrators that I frequently had to go back and check from whose perspective I was reading from and attempt to figure out the relationships between them. Though this novel was fairly tense, that was purely down to the situation, and I felt like taking it down to one or even two narrators would have amped that terror up to higher levels. I found myself jolted out of the story and into someone else’s head every time something significant happened and that meant that I never cared for any of the characters; in fact, I ended up caring for one of the protagonist’s brother, Matt, most of all.

The narrative is interspersed with tweets as the trapped students try to alert the outside world as to what's going on in Opportunity’s auditorium, attempt to contact friends and loved ones and generally report on the situation. Obviously I've never been in that situation (thank goodness!), but tweeting would just never cross my mind! It seemed a little off to me. Surely, like one side character did, you’d attempt to secretly dial the police, call you mum or text a family member? This element being included did bring up the topic of the press as vultures, however, which was really interesting. In his desperation to get first dibs on the story, a reporter was tweeting students from the school, whether they were inside or not, and trying to get them to tell him what was going on. It was disgusting.

My favourite thing about the novel, and what kept me reading until the end, was the idea that even the possibility of a horrible death doesn’t stop goodness or humanity in any way. This situation causes two best friends to realise they’re more than friends, siblings to forgive each other after a year of not communicating and brought out the quiet heroics of two boys desperate to do something, anything to help those trapped inside. I really would have liked to have seen that as a stronger focus, and I would also have loved for one of the perspectives to be from the shooter. It felt like he had control of the school for a long time and I’m grimly interested in how he viewed the situation as it progressed.

Marieke Nijkamp stormed it with the diversity in her debut. There was a full portrait of a school represented and it felt natural and authentic, very like my own high school. We had chronic illness that had day to day effects and people of different classes, home situations, nationalities, races and sexualities. Nijkamp is really taking the lead on this, as she should for someone so heavily involved in We Need Diverse Books, and I hope people follow her example.

This is Where It Ends makes a strong point about America’s gun crime and school shootings, but it was too harshly cut and dried for me and I think it could have been explored from other angles that would have made a greater impact.

Thanks to Sourcebooks Fire and NetGalley for the review copy.