From Page to Screen: Divergent 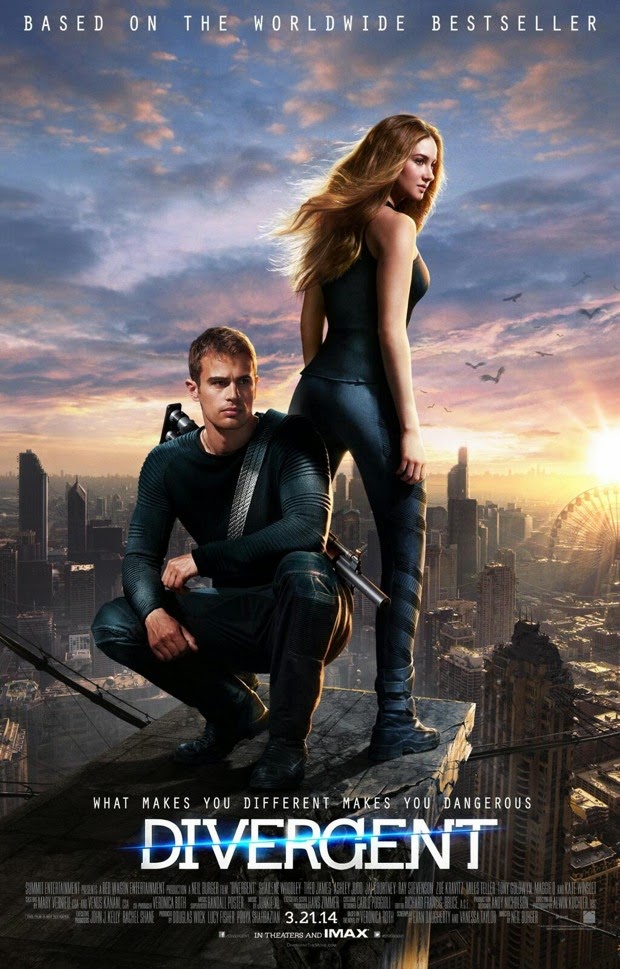 What’s it about?
In a world divided by factions based on virtues, Tris learns she’s Divergent and won’t fit in. When she discovers a plot to destroy Divergents, Tris and the mysterious Four must find out what makes Divergents dangerous before it’s too late.

How does it hold up?
I don’t really know how I felt about Divergent. I enjoyed it, but there were also quite a few things that I really didn’t like and other that I was completely apathetic about.

As the film opened, I was quite taken with the way they how closed off the city was, the towering, wired walls and the desolate, brokenness of the surrounding Chicago, and the endless blank fields of beyond that. As a reader, it wasn’t something we got to hear about until later in the trilogy, but I think it really set the tone of the film and was essential in establishing the type of society Tris had been brought up in. The sense of being penned in and controlled came across instantly.

I was slightly disappointed with Tris, however. Though I could see her fear and confusion at taking the Test, choosing her future faction and figuring out who she is, I didn’t feel it. I rarely felt anything from her in the film, the only exception being in final fight against the controlling serum when Tris lost her mum. Then briefly at the very end when they were on the train out of the city. That was one of the few times I felt a spark between Tris and Four as well. Their attraction and relationship didn’t seem to have any foundation other than that they’re both hot. There wasn’t much chemistry there at all. Shailene Woodley isn’t my Tris.

I liked Theo James as Four though. He was cold, harsh and untouchable for most of the film. There were only glimpses of the human underneath and I loved the way that they became more and more frequent as the story evolved. I especially liked it when sarcastic and funny Four escaped and made me laugh; it was definitely needed. I was struck by how much older than Tris Four looked. I know he was supposed to be older than Tris at 16, but he looked like 24/25. Gotta say though, he’s BEAUTIFUL.

My favourite element of the film, other than Theo James’ face, was the fear landscapes. I loved them in the novel so I was really looking forward to seeing how they translated to the screen. They seemed so real to Tris and I loved how integral they were to the film; I was worried they may not be made as important as they were in the novel. Those scenes were also some of the few parts of Divergent where I thought Tris and Four’s relationship had a clear opportunity to develop. Their romance wasn’t the overpowering presence in the film which was refreshing.

I really liked all of the supporting characters, particularly Eric. He was genuinely creepy and intimidating, and I liked that there was a sense of history and competition between him and Four. Then came the friendship between Four, Christina and Will which felt genuine and there was a real connection between them, especially between Tris and Christina.

Overall, I think the film as a film alone was really good, though as an adaptation, it wasn’t quite what I wanted. Saying that, I saw it with my younger sister who hasn’t read Divergent as she felt a lot of the same things about the film as I did. I’m sure they will follow this up with an adaptation of Insurgent and I’m intrigued to see how I fell about that as I was disappointed by the novel.

Book or film?
Hmm, this is a difficult one. I loved the book, I really, really did, but the rest of the trilogy didn’t live up to it and that seems to have marred the whole series for me. And though the film was enjoyable, I don’t know if I’d watch it again, but I’m going to go the book, purely for my initial love of it.