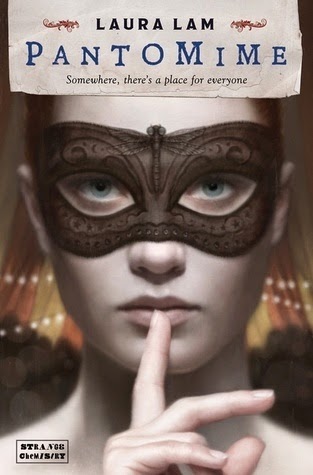 I’ve been hearing amazing things about Pantomime since it was published over a year ago, and I still wasn’t entirely sure I wanted to read it, but I bought it when it was on a Kindle deal to give a go. LGBT Month provided the perfect opportunity; I’m so glad I took it.

Pantomime is set in a fantasy world that feels a lot like an alternate Victoriana with the outfits, the stereotypes and constrictions, the social class hierarchy and the disdain of lower class pursuits such as the circus. Gender roles was a strong theme behind Pantomime - why however, I can’t reveal without ruining the book! – but they especially reflected the old-fashioned ideals of a demure, sociable, pliable lady who’s main aim in life is to secure a husband. Laura Lam questioned what it is to be female, male, a girl and a boy in both obvious and unexpected ways. She also prompted the idea that there are differences between sex and gender which I don’t think I quite got my head around, but it most definitely made me think. Pantomime took on a tough and sensitive subject that I honestly don’t think I’ve ever come across in a book before and it did it brilliantly.

Under the gender struggles lay daily life at the circus. I loved how much danger, disquiet and corruption hides under the magic and illusion; I imagine learning about the behind the scenes of a circus is a lot like seeing your childhood crumble in front of you! I loved how much attention was paid to Micah’s training, the shows and how the other performers treated him, even if it was mostly horrible. Alternating chapters between Gene and Micah gave both the high-class society and the working class circus grounding in the highs and lows of both situations and explore the themes of the novel.