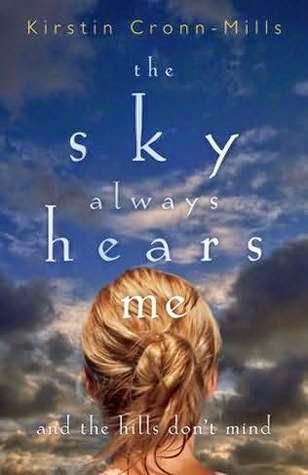 Other Titles by this Author: Beautiful Music for Ugly Children

Sixteen-year-old Morgan lives in a hick town in Nebraska. College is two years away. Her mom was  killed in a car accident when she was three, her dad drinks, and her stepmom is a non-entity. Her boyfriend Derek is boring and her co-worker Rob has a very cute butt that she can’t stop staring at. Then there’s the kiss she shared with her classmate Tessa...

But when Morgan discovers that the one person in the world who she trusts the most has kept a devastating secret from her, Morgan must redefine her life and herself.

The Sky Always Hears Me was really not what I expected it to be, and I’m sure that’s a good thing either.

I found Morgan incredibly irritating. My dislike of her built throughout the novel. She’s selfish, arrogant and childish – basically a sixteen year old girl struggling with her life, but I can handle that, if there’s something about the personality of the protagonist for me to hold onto and I didn’t find that with Morgan. She had difficult relationships with her friends, her dad, her stepmum and her boyfriend, but I really loved that she had a genuine connection with her little brother. He’s a really interesting character and their interactions and the brother/sister vibe between them isn’t your usual YA violent hatred job.

The Sky Always Hears Me is very different to the rest of the LGBT books I’ve read this month in the way that the characters deal with their sexuality. It was vague and searching and there wasn’t a LGBT relationship that had a sense of concreteness that Morgan could explore properly. It was slightly disappointing, though I did like that the novel explored the issue from a different angle to usual.

The difference in angle of the novel was also reflected in the style. The Sky Always Hears Me is rather literary and philosophical, exploring the idea of fortunes and Morgan making them up and leaving them all over the place. It reminded me a little of the way poetry was shared by the main character in Jandy Nelson’s The Sky is Everywhere, but not as effectively. There was more of a whiny and attention seeking quality to it which took away from fortunes that were witty and amusing and could have been a really interesting element of the novel.

I was  rather disappointed by The Sky Always Hears Me and I’m sad to say that it’s my least favourite book of LGBT month so far, but it is an interesting read to see the subject from a lower, more hidden angle.