LGBT April: The Difference Between You and Me, Madeleine George 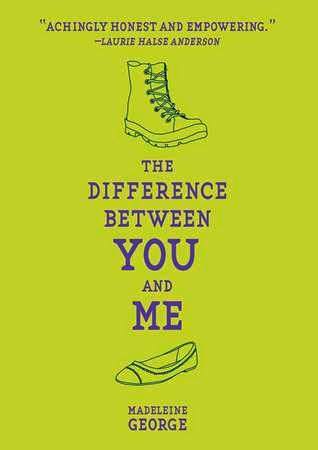 Other Titles by this Author: Looks, Precious Little, The Zero Hour

I had incredibly high hopes for The Difference Between You and Me but I was rather disappointed.

Firstly, the things I did enjoy. The structure of George’s novel is interesting and unique, and I think it works... The Difference Between You and Me is split between three points of view: Jesse, Emily and Esther and there’ll as in first person present tense, except Jesse’s chapters. Her story is told via close third person. That in itself is a bit unsettling to begin with, but with the dramatic change, it definitely stood out. That reflected George’s idea of Jesse, I think; just how different and revolutionary she is.

My favourite element of the novel was the way that Jesse and Emily’s relationship was explored and resolved, because it didn’t end with a kiss and a happily ever after. It ended with Jesse realising she was worth more than a secret and actually, she had to support her beliefs. It’s unusual for the core relationship of a novel to not be the endgame and it was refreshing. I wish more YA would go in that direction as I think it’s far truer to life and teenage love.

Although I enjoyed and even admired those aspects, I was overpowered by my complete ambivalence towards all of the characters. The novel could have stopped halfway through where they all drove off a cliff and I’d be completely cool with it, ready to move on to something else. There wasn’t a single spark for any of them. I can understand that with Emily (selfish, naive, irritating), Jesse’s mum (infuriating and overly dramatic) and Wyatt’s dad (a bigoted idiot), but I don’t quite know why I felt so ambivalent towards Jesse and the rest of the characters!

My final book for LGBT April was a bit of a disappointment, but I’ve read a crapton of amazing books this month so I can’t really quibble too much!