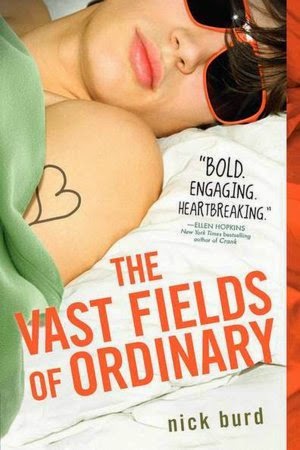 It’s Dade’s last summer at home in a suburban wasteland, and things are pretty hopeless. He has a crappy job, a “boyfriend” who treats him like dirt, and his parents’ marriage is falling apart. So when he meets the mysterious Alex Kincaid, Dade feels as if he’s finally experiencing true happiness. But real love has consequences, and its power soon sets in motion a tragic chain of events that will change Dade’s life forever.

I picked up The Vast Fields of Ordinary on a whim; with no knowledge of the book, the author, the reviews, going purely on the cover and the first few pages. I’m so glad I took a chance on it.

Dade is a wonderful protagonist. He’s suffering through the last summer before college with a job surrounded by people he hates, parents who are driving him mad with their fighting and obvious dislike of each other and his desperate need to be loved. The way that Dade changed around his “boyfriend” Pablo was so clear. He became lesser, crushed by the lack of feeling in Pablo, the forced secrecy and shame he was viewed with. Meeting Alex was a revelation.

I liked Alex immediately. It’s impossible not to; he oozes easy charm, but he also has a depth and a darkness that pulls you in. I felt the pull between him and Dade very quickly, but none of the chemistry. It was a slow build and by the time Dade’s parents swanned off to Europe and they were left to their own devices, they were bubbling with chemistry. But not just sexual chemistry, they had a proper connection and an understanding of each other that I fell in love with. Alex was exactly what Dade needed, and so was Lucy. The rebellious teen sent to live with her aunt for the summer after her ultra-religious parents discovered she was gay. She added a spark to Dade’s life before Alex did. Lucy provided Dade with someone to confide in, someone to comfort him, someone to gush about Alex to.

With they were having the summer of their lives, I felt a serious sense of doom. With the background of a missing girl and the threatening course Pablo’s feelings took, I was expecting the worst. I constantly changed my mind about what would happen, but I ended up being right. It was a powerful, brave ending that really drove home the message. It made me wonder just how many LGBT teens had experienced the same thing.

The Vast Fields of Ordinary is a beautiful, sultry novel of friendship, love and the struggles of growing up. I’m definitely going to be keeping my eyes open for more from Nick Burd.