Blast From the Past: Emma 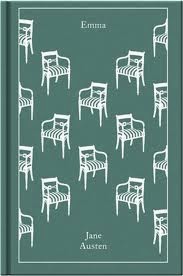 Originally published in 1815 by John Murray

My edition: free Kindle edition (but soon to be the gorgeous Penguin Clothbound Classics edition above!)

What’s it about?
Quick-witted, beautiful, headstrong and rich, Emma Woodhouse is inordinately fond of match-making select inhabitants of the village of Highbury, yet aloof and oblivious as to the question of whom she herself might marry. This paradox multiplies the intrigues and sparkling ironies of Jane Austen’s masterpiece, her comedy of a sentimental education through which Emma discovers a capacity for love and marriage.

Why now?
I read and loved Pride and Prejudice, Sense and Sensibility and Persuasion years and years ago and I’ve watched all of the adaptations a million times, and yet I still have three to go. It’s just time.

I first tried reading this when I was 14 to no avail. Then I tried again at 17. I just couldn’t connect with Austen’s style, even though I had already read and loved three of her novels, and I didn’t like Emma’s voice. I found her shallow, selfish and irritating. It’s amazing the difference four years and an English Literature degree makes!

For the first time, I really, truly appreciated the skill of Jane Austen. Many a conceited, and usually male, critic has called her work merely romantic fiction. What an idiot. The wit, the humour, the social satire, the weaving of characters purely to exploit and dramatise those features – everything in Austen’s novels feels purposeful and skilful. Six run-of-the-mill romances wouldn’t survive two hundred years and spawn countless adaptations, would they? With Emma, I finally realised, from a literary point of view, why Austen’s novels have achieved what they have.

At the beginning of the novel, I still found Emma to be haughty and a little frustrating – Austen herself was aware she was writing a character not many people but she would like - but I soon to grow to love her; those qualities are a part of her charm. There really wasn’t anything to dislike about her. She is truly a product of her society and class and I don’t think that has been quite so obvious before in the Austen novels I’ve read as of yet, but that also allows her to be progressive in some ways. Emma is the intellectual equal of Knightley; she will defend her opinion, argue against it, and she is comfortable around him. She also denies love and all ideas of attachment – it’s just not for her. She’s happy at Hartfield and she couldn’t leave her poor father behind for any man. She desires to better those below her, well, Harriet anyway, and elevate her status by teaching her to think of herself as higher. It’s naive and doomed to fail, but her heart really is in the right place. I really started to feel genuine affection towards Emma, even if she was a little controlling of poor Harriet! There is, of course, the argument that these options are only available to Emma because she is so wealthy. She must be Austen’s richest heroine, I think.

I don’t that it is just Emma who is a product of living in England in the early 1800s, however. Miss Bates is a rather simpering character and, man, did she get on my nerves! The incessant talking! She just made me feel tired. Though a valued member of the village, Miss and Mrs Bate and Jane Fairfax are all a few steps behind the Woodhouse’s and Mr Knightley. Then came the insufferable Mrs Elton, who in marrying the equally disagreeable Mr Elton, elevated herself far above her position and into annoyance and disrespect. But in all honesty, it’s Mr Woodhouse that takes the crown. Poor, lovely Mr Woodhouse. Petrified of himself or any of his friends and family falling ill, completely against marriage and feeling that Miss Taylor becoming Mrs Weston was a terrible tragedy. He’s both endearing and pitiful, and the sacrifice that was made for his happiness at the end of Emma almost made my heart jump straight out of my chest and into Mr Knightley’s face.

By the time I came to read the last few chapters of Emma, something happened to me that I never thought would occur when reading a nineteenth-century novel: I squeaked with giddy happiness. I genuinely squeaked and kicked my legs in excitement a little. On that fateful walk in the garden when Knightley declared his true feelings for Emma and the previous scenes where Emma has realised that she had had feelings for a certain Mr George Knightley than she could remember. To the reader, Emma’s regard for Knightley is evident from the beginning: her joy at him spending evenings at Hartfield, how their arguing tormented her, and her utter conviction that Knightley could never, ever marry.

Emma is absolutely gorgeous. I both can’t believe that I left it so long, but I’m also glad I’ve just got to read it. This novel has re-fired my conviction to read both Northanger Abbey and Mansfield Park this year.

Does Emma’s tendency towards naivety annoy you? Or endear her to you? Was Emma’s friendship with Harriet as harmful as Knightley thought? Have you ever fallen head over heels in love with a classic you previously couldn’t connect with?