This Star Won't Go Out: The Life and Words of Esther Grace Earl, Esther Earl, with Lori and Wayne Earl 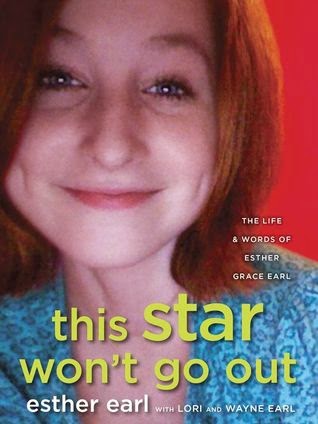 Diagnosed with thyroid cancer at aged twelve, Esther (Persian for “Star”) Earl was an exceptionally bright and talented – but very normal – teenager. She lived a hope-filled and generous, outwardly focused life as she navigated her physical decline with grace. A cheerful, positive, and encouraging daughter, sister, and friend, Esther died in 2010, shortly after turning sixteen, but not before inspiring thousands through her growing online presence.

From the moment I pre-ordered This Star Won’t Go Out, I knew I’d struggle to read it emotionally, but I also struggled to read it for other reasons too. It was entirely unexpected.

Most people in this community will know the vagaries of Esther Earl’s story, and her connection will John Green made a lot of people interested in reading this book, me included. Featuring a teenage girl dying of cancer, it was never going to be easy to read, and it isn’t. It started with a foreword by John Green whose love for Esther and anger at her death make me choke up – I could only imagine the state I would be in if he wrote more it. Saying that, I didn’t actually cry or even choke up for the most part of This Star Won’t Go Out. It wasn’t until Lori and Wayne (Esther’s parents) started detailing her last days, her death, the aftermath and the contributions from her friends and family reflecting on her passing that made me bawl. This is probably because I didn;t quite connect with Esther.

It almost feels wrong to say this, but I actually found her a little irritating in some of her letters and diary entries. I loved her blog posts and the collection of fiction at the end of the novel, but she sort of irked me in a way, and I think I know why. She discussed God and her faith a lot – the strength it gave her, the safety, the sense of a divine plan – and it made me angry. I’ve never been religious, though I’ve always wanted to believe, and then my mum died. I guess it’s that I can’t imagine a God who would let something like cancer exist in our world. If I ever had a vain of hope in him, it was abolished the second my mother was diagnosed. I just plain couldn’t get my head around how she remained faithful and I guess I was probably jealous of the comfort it afforded her when my mum, me and my family didn’t have that. Because, in all honesty, Esther was clearly a wonderful young woman.

She was incredibly talented in writing and creating and interacting through letters, YouTube videos, drawings, blog posts, letters, emails, poems and stories. She was fighting her cancer with grace (her middle name), but she was still a teenager. She admitted to being lazy; arguing with her parents and sisters; desperately wanting to be kissed by a boy; feeling scared, and angry, and confused; guilty for the pain and money she was causing her parents; every natural and normal thing for a teenager in her position to feel. She wasn’t a saint or a romanticised version of a cancer child. She was a real girl with hopes and dreams and wants, even if they were slightly more than your usual teenager’s! And everyone loved her. She clearly made such an impact on those around her, and I wish I had known about her before she died so I could have formed an opinion of her, based on her, rather than how everybody else sees her.

I also have to talk about the actual book itself as an object. It’s gorgeous. A 400-page hardback with thick, lovely paper that’s miles above the stuff you usually get in US books. The pages are full-colour with illustrations on the page corners and filled with photos, copies of drawings and letters and emails and everything they could possibly fit in. Penguin clearly sunk a lot of money into producing this book and it’ll definitely be something that friends and fans of Esther will be able to treasure.

This Star Won’t Go Out is a worthwhile and interesting read that will most definitely stamp on your heart. Please, please make sure you have a decent supply of tissues before you begin...