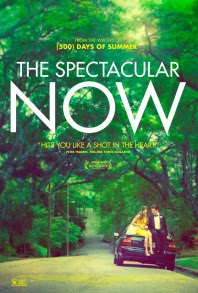 Other Titles by this Author: Falling Dark, Knights of the Hill Country, Badd, Mojo

Until he meets Aimee. Aimee’s clueless. Aimee is a social disaster. Aimee needs help. It’s up to Sutter to show her a splendiferous time and then let her go.

But Aimee’s not like other girls and before long he’s in way over his head. For the first time in his life, he has the power to make a difference in someone else’s life – or ruin it forever.

The Spectacular Now included every element that I wanted and expected from it: snark, quirkiness, depth and a heart-achey ending.

There isn’t a huge amount of plot in The Spectacular Now, but there honestly doesn’t really need to be. It’s a novel driven by its characters. Characters that are so vivid, so alive and so real that it’s impossible not to get sucked into their lives. Sutter is an incredibly strong protagonist with his tendency towards constant day drinking, ignore the future and consequences and believe that eventually everybody will leave him. Aimee is Sutter’s opposite. I hate this expression, but there’s no other way to capture Aimee at the beginning of the novel: she’s a wet blanket. Her passionate love of sci-fi, reading and space makes for a wonderful character, but it’s hard to get there underneath her lack of self-worth, shyness and tendency to just follow the leader. I loved watching her grow and blossom under Sutter’s attention, even if it perhaps wasn’t the healthiest way to gain confidence...

I really enjoyed reading about their relationship. They brought something different, something buried, in each other and made them face the things that were holding them back: Aimee’s mum and Sutter’s dad. The way their relationship reflected on Sutter’s previous relationship and the interactions with their girlfriends were really interesting and demonstrated both how right and how wrong Aimee and Sutter are together. It’s such a different relationship to ones you usually see in YA and it was a breath of fresh air. That is especially the case with the ending: bittersweet, tender and completely perfect for the characters and the novel. I loved it.

The Spectacular Now is a sad, strong and heartfelt story, with characters that single-handedly carry the novel, which I thoroughly enjoyed. This is what contemporary YA should be.