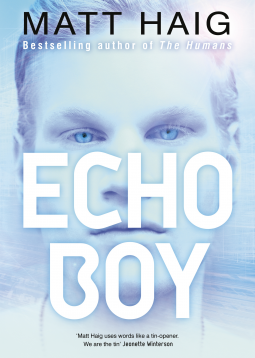 Other Titles by this Author: Shadow Forest, The Runaway Troll, The Radleys, To Be a Cat, The Humans

Audrey’s father taught her that to stay human in the modern world, she had to build a moat around herself; a moat of books and music, philosophy and dreams. A moat that makes Audrey different from the echoes: sophisticated, emotionless machines, built to resemble humans and work for human masters.

Echo Boy is Matt Haig’s first foray into the world of YA and he’s started with a unique and thought-provoking story of love and loss.

Audrey lives in the England of 2115 where transport is hyper-speed (London to LA in an hour!), genetic engineering has gone crazy and robots and Echos are in every home. I love this world; it’s scary and clever and worryingly believable. In just 100 years from now, our planet has been plagued with wars over fuel, climate change so extreme that Northern Europe is mostly flooded and Southern Europe is blistering desert and advances in technology so unnatural they are causing riots and protests daily. Often on the receiving end of these protests is Alex Castle: millionaire businessman and Audrey’s uncle.

He’s a hard character to pin down and from I struggled to make my mind up about him for a good while after Audrey had gone to live with him. I eventually decided that he makes my skin crawl. As the creator of some of the most advanced technology out there and the owner and designer of the Resurrection Zone, I was definitely on the side of the protestors. A place where extinct animals such as tigers, woolly mammoths, dodos and Yangtze dolphins have been genetically engineered back in being and put on show. And disgusting show it is: tortured into making a scene and hurting their keepers – unwanted Echos – to get an audience and hide the sounds of the protesters. It made me feel sick.

As always, Matt Haig has drawn a gorgeous portrait of humanity and love in Echo Boy. His books never fail to make me think.