The Moon and More - Sarah Dessen 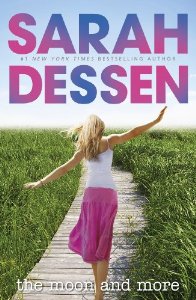 Other Titles by this Author: That Summer, Someone Like You, Last Chance, Dreamland, This Lullaby, The Truth About Forever, Just Listen, Lock and Key, Along for the Ride, What Happened to Goodbye

Emaline is spending her last summer before college in her beach home town of Colby. Everything is familiar - from working for her bossy sister Margo at the family rental company to Emaline's gorgeous (and regularly shirtless) childhood sweetheart, Luke.

But when an out-of-town brash New York filmmaker and her young assistant Theo, come to stay at one of the beach houses, everything Emaline bought she knew about herself changes.

But can her heart let go of a life she's loved for so long?

It’s no secret that I worship Sarah Dessen and her books and I love that I know exactly what I’ll get from them. The Moon and More, however, was a little different to her previous novels, but I still loved it.

Sarah Dessen took an unusual turn for her immediately with her main character being in a happy, healthy and normal relationship. I have a fair few things I want to say that stem from this statement, so please bear with me! Firstly, I was so pleased that it wasn’t a horrible relationship Emaline was escaping to be with the cool, different, out-of-towner like it would be in most contemporary YA novels. It was more of a natural growing and changing of the characters; it was real life. Add into the mix Emaline’s male best friend who was just that, a friend, who had no impact on her relationship with Luke and many tropes imploded.

One of the things about Luka and Emaline’s relationship that I didn’t really realise until I finished the book was how well Sarah Dessen wrote Emaline as an eighteen-year-old girl with a firm grasp on sexuality. She was in a sexual relationship with her boyfriend of three years and was happy and comfortable in it. It held no weight on her decisions surrounding him in the future; it was just part of their relationship as it would have been. I’d love to see this in more YA as I think it’s important to show girls that it’s okay.

Leaving Luke behind, The Moon and More began to focus on Emaine’s burgeoning relationship with New York film assistant Theo. I loved him at first. He instantly seemed different to the usual Dessen boy but I was pleased about that in a way. He’s quirky, cool, unabashedly enthusiastic and extremely driven. Theo also has a few nerdy and irritating qualities, but that made him interesting. Emaline’s eyes were opened to a new perspective by Theo and it made her journey across the novel even more poignant. There is a moment between the two of them when you realise just how confident and stable Emaline has become in what she wants, needs and expects from herself and everyone and everything around her. It was a lightbulb moment for her and for me as a reader as I realised that maybe Theo wasn’t quite what I wanted and imagined him to be.

Dessen’s ability to craft characters with incredible depth, personality and history is one of her defining features as a writer, as is her aptitude in taking them on a journey of self-discovery aided by the people in her life. The connections that Emaline had with members of her family leapt of the page. I especially loved the interactions with Margo and Benji. You fight with your sisters constantly, I know I do, but that doesn’t change the fact that they’re your sister and again this is something that isn’t represented in YA very often. Benji was just plain adorable! I wish my little brothers were as fun to be around as him! Then we have Emaline’s (sort of) relationship with her father, not dad, father. Though the situation is very different, I completely understand Emaline’s expectations of him and the crush when they aren’t met and there were a few moments where it hit a little close to home and I nearly teared up! Even though Emaline learned that you have to expect disappointment from some people, Dessen made it clear that just because people make mistakes (which they always, always will) it doesn’t make them love you any less or make them bad person.

Well, that was getting quite heavy! Instead of delving deep into my twisted psyche through examining Emaline’s family relationships, I’m going to gush about just how much I love Colby and the characters from previous books still hanging around there. We got to revisit some of the lovely characters from Along for the Ride! Auden, her stepmum, Maggie and Abe’s Bikes all made an appearance and it was lovely to see them again. The only one that was missing was Eli... I was also taken back to the Launderette and Last Chance where I *think* Emaline was served by Colie from Last Chance (or Keeping the Moon as it’s called in the US). I love that all of her books are contained in the same universe!

Though The Moon and More was a little different to her previous books, Sarah Dessen once again delivered a gorgeous summer story of love, loss and growing up. There’s a reason why she’s my favourite and every new book proves me right.

For my 2013 Contemporary YA Reading Challenge

Thanks to Puffin for sending me a copy to review; you made my day!