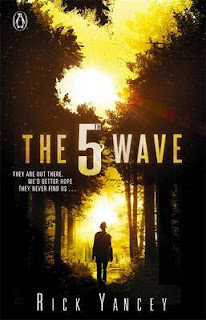 Other Titles by this Author: The Monstrumologist, The Curse of the Wendigo, The Isle of Blood, The Final Descent (10/09/13)

The 1st Wave
Took out half a million people.

The 2nd Wave
Put that to shame.

The 4th Wave
You can’t trust that people are still people.

The 5th Wave?
No one knows.
But it’s coming.

There’s been a crazy amount of buzz surrounding The 5th Wave over the last few weeks, and though I really enjoyed it, it sadly didn’t blow me away like I was expecting it to.

Rick Yancey melded the post-apocalyptic and sci-fi genres really well and thinking about it, where aren’t they mixed in this way more often? An alien invasion would be the end of our world as we know it, after all. I think that jumping into the middle of take over instead of joining the characters just before was really effective and it mean that there wasn’t any jump between the genres. It was also just generally refreshing to have some background on the world to go on straight away; there was tension and fear as to what was going to happen next before I even opened the book.

The 5th Wave surprised me with more than just the effortless blend of genres: I definitely wasn’t expecting multiple narrations. Cassie launches the novel and she’s the main character, but a few other voices pop up and then Zombie becomes a dual narrator and I was thoroughly surmised by this. Definitely in a good way, of course; you guys all know how much I love dual narration. Cassie and Zombie are very different characters and their stories complimented each other perfectly, showing very different sides to the effect of the invasion.

Rick Yancey delivers a beautifully written novel that breaks genre boundaries and makes you fall in love with his characters and yet I still didn’t fall head over heels with it like everyone else seems to have done. Maybe it’s because it took me so long to get through or maybe it just caught me at the wrong time because there is nothing I can think of to criticise about the 5th Wave so it must be me! It’s clever and unexpected and I really wish I had fallen for it.

This is an incredibly difficult book to review and keep spoiler-free! All I can say is go and read it and discover The 5th Wave for yourself and then join me in the wait for book two.

Thank you to Penguin for sending me a copy for review.