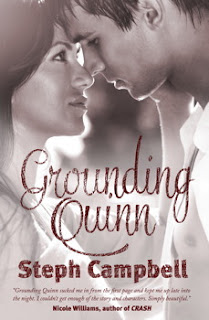 Other Titles by this Author: My Heart for Yours, Delicate, Lengths, A Toast to the Good Times, Beautiful Things Never Last

Quinn MacPherson’s biggest fear has always been turning out like her crazy mother or cold-hearted father. That is, until she meets Benjamin Shaw.

Quinn thinks hooking up with Ben over the summer will be just a quick fling – and with his hot body and heart-breaking smile that’s all she really wants. But Ben’s not just some guy. He gets her – the real her, flaws and all – and that’s scary as hell. So Quinn does what comes naturally: she pushes him away, breaking his heart before he can break hers.

Ben isn’t prepared to let her go that easily. He knows Quinn is special, and he’ll do whatever it takes to make sure they’re together. But will he be able to persuade Quinn to open herself up and allow him into her life...and her heart?

Oh, New Adult. I’ve tried, I really have. It’ll be no surprise to those of you who follow me on Twitter and were around late Wednesday night that I didn’t quite get on with Grounding Quinn. I was hoping this’d be the NA that’d hook me, but sadly not.

The relationship between Ben and Quinn moved so quickly. They went from just met to going for a road trip the next day and I just couldn’t accept it. There was no gradual respect, caring, friendship, trust, it just went bam! you’re hot and I’d like to kiss your face. Trust was later established in their relationship but I never really felt like they properly loved each other. All I could see on Ben’s end was his physical attraction to Quinn and she liked that he was hot and was there for her even when she wasn’t very nice. I really couldn’t find much substance in it until closer to the end, but even then it was tenuous.

I can’t imagine it helped that I didn’t like a single character in this novel besides Sydney, Quinn’s best friend. Quinn was, excuse my language, a bit of an asshole most of the time and Ben was trying to be a gentleman but his constant references to how ‘gorgeous’, ‘hot’ or ‘sexy’ Quinn was undermined that for me. I didn’t really get a grasp on many of the secondary characters and most of them seemed more like plot devices that people in Quinn and Ben’s life. I understand that secondary characters are plot devices, but I rarely think that when I read about them in novels like I did in Grounding Quinn.

Usually my major qualm with the NA books I’ve read so far is the writing, but I didn’t really have any major issues with this. It wasn’t anything stand-out but it wasn’t bad, it was just okay really. it was the characters and the relationships that bothered me and stopped me from becoming involved with the story. One of the only things I have to gripe out prose-wise is how often Quinn told us the exact name of each and every bloody nail varnish she was wearing. The first time, okay a little character info, she likes red. The second time, hmm, big change. By the third I was just annoyed. I mean, unless it has a role in the story or her characterisation I just didn’t care. I thought it was a strange and rather amateurish thing to include as it had no purpose. The second was the time jumps. I never felt any indication of time passing or a gap of time between two chapters and I was suddenly thrown when it was months later. I find time jumps an impossible thing to do smoothly myself but it’s usually something so effortless in novels that I don’t even notice it enough to learn how to do it, but in Grounding Quinn I was just lost.

Grounding Quinn isn’t the worst NA I’ve ever read but I wasn’t a fan and I won’t be reading any more books in the series or by Steph Campbell I don’t think, but fans of the genre will lap this up in one sitting.

Thanks to S&S for providing me with a review copy.