From Page to Screen: The Great Gatsby 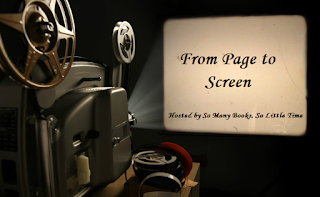 THE GREAT GATSBY
Adapted from The Great Gatsby by F Scott Fitzgerald (1925, Scribner) 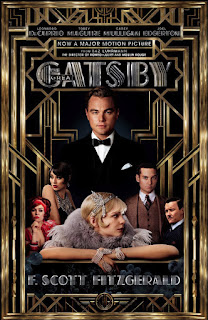 What’s it about?
When Nick Carraway moves from the Midwest to New York, he ends up living next to a mansion owned by the mysterious Jay Gatsby. Gatsby throws glitzy parties and yet no one knows where he gets his money. Nick quickly becomes embroiled in a world of money, lust and excess.

How does it hold up?
Before the film even started I knew that Baz Luhrman’s interpretation of The Great Gatsby would have a completely different atmosphere to the novel. Fitzgerald’s novel is subtly beautiful and reflective, Luhrman, well, he’s brash and showy. In a good way, of course – I’m a fan.

Aside from the overarching feel of the movie differing vastly from the novel, it was pretty much exactly the same as the novel in other areas. The plot was followed exactly with the only difference that I noticed being how Nick told Gatsby’s story. Even that worked brilliantly though and it made way for one of my favourite effects in The Great Gatsby: the way that some of the words appeared on the screen in various gorgeous fonts as Nick wrote them. Gorgeous! It’s also difficult for a movie to be retrospective and work as effectively as it does in prose, but Luhrman’s interpretation made it work and kept it tied closely to the novel.

I think that all of the characters were nailed as well. Gatsby was sweet, mysterious and tragic; Nick was bashful and intelligent; Daisy was shallow and sly and Tom was actually not as repulsive as he was in the novel. I also found Daisy a lot less irritating. In general, I felt a lot less for each of the characters than I did whilst reading the novel. That’s something I kind of expect when I go into a film, but in this case I think it may have been because The Great Gatsby adaptation is all about show. It’s flamboyant, lush and cinematic. It felt more like a glimpse into the Roaring 20s than an almost satirical look at excess, hope and loss which is what I got from the novel.

The period really came alive. The costumes, the jewellery, the colours, the effects; gah! So gorgeous! Through in how incredible and over the top Gatsby’s party looked and I was sold. The luxury and excess is so, so appealing and especially now for some reason. One of the things that really brought them to life was the soundtrack. When I first heard that it was produced by Jay Z I did the whole ‘eyebrow raise, grimace’ thing, but it completely worked. It was a little strange on occasion and I wouldn’t listen to most of the soundtrack without the film, but I definitely feel that it fit the feel of the movie. All of those scenes were visually stunning and the music made it pop. It felt like I could climb into the screen and party with Nick, Gatsby, Daisy, Tom and Jordan. 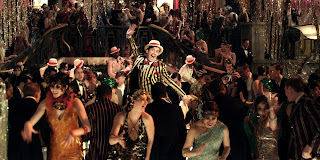 Speaking of Jordan, she didn’t have as substantial a role as she did in the book and I was quite disappointed that the gorgeous quote about how Nick might be in love with her was missing; it’s one of my favourites: “Angry, and half in love with her, and tremendously sorry, I turned away.” They did, however, end on the extremely famous quotes that ends the novel and kept in all of the other famous ones. I think Baz Luhrman’s adaptation is a tribute to the book and it compliments it beautifully. I can’t wait to own the DVD and watch it over and over.

As the lights went back up, I was left with a smile, slight heartache and a desperate need to re-read Fitzgerald’s masterpiece. I think that says it all ready!

Did Luhrman miss the point of The Great Gatsby? Was your favourite quote included? What If you haven’t read it, did the film make you want to?