Everything is Fine (and other lies I tell myself) - Cathy Brett 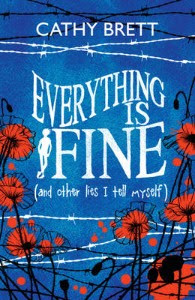 Things haven’t been going so well for fifteen-year-old Esther Armstrong. With her brother Max – her closest ally – absent, she’s forced to face everything alone, not least her parents’ heated arguments. As the summer holidays stretch endlessly ahead, she’s desperate for something, anything to divert her attention.

Then she finds some letters hidden in the walls of her family home, sent by a soldier to his sweetheart from the trenches of WWI. Esther is consumed by the mystery of these lovers – not very much older than herself – and what became of them. Perhaps in piecing together the jigsaw of someone else’s life, Esther can work out how to reassemble her own, and how to make everything fine again...

I’ve been a fan of Cathy Brett’s graphic novel/traditional YA novel mash-ups since Ember Fury was released in 2009, but Everything is Fine (and other lies I tell myself) really blew me away.

The combination of gorgeous art and a fantastic novel is so unusual and not many people could carry it off, but I honestly don’t think that one could work without the other. They complement each other beautifully and make the story a whole. I think that Cathy Brett’s style is a brilliant way to introduce younger and more reluctant readers to YA. Reading Brett’s novels isn’t just reading, isn’t something more that I think will capture imaginations effortlessly.

The war aspect of the nothing was something I was rather apprehensive about as I struggle reading about either of the wars, but the link with the letters made it personal and more approachable to me. It quickly became my favourite aspect of the novel. I was as desperate as Esther was to find out the fate of Freddie and Dotty and I want nothing more than to find a hundred year old love letter hidden behind my fireplace so I can go along on a journey like Esther’s.

I loved how Esther’s story became tied up with Freddie’s. Esther’s involvement and reaction to what she was finding really pulled at my heartstrings and I finished the book with tears in my eyes. It’s an incredibly powerful storyline that was effortlessly pulled off. the only thing that reduced the impact may have been that I had guessed the big revelation that is revealed at the end of the novel, but hopefully it’ll surprise everyone else. It’s a biggie, after all!

I thoroughly enjoyed Everything is Fine (and other lies I tell myself) and I’m already looking forward to whatever Cathy Brett delivers next.

Thanks to Headline for sending me a proof to review.