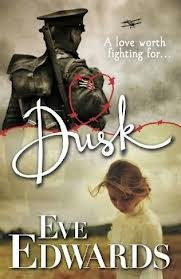 Other Titles by this Author: The Other Countess, The Queen’s Lady, The Rogue’s Princess

She leaned over the next patient, another young soldier with a dressing wound to his throat. Whitworth, 1st Somerset High Infantry, Sebastian’s regiment.

HELEN SANDFORD has learnt never to expect too much from life – until she meets an aristocratic artist Sebastian and surprises even herself by falling in love.

All too soon they are separated by the First World War. He enlists as an officer, while she nurses the soldiers injured in the bloody trenches. But their biggest battle is yet to come, because Helen’s past is filled with secrets...

The first part of an epic wartime romance.

I’m a big fan of Eve Edwards so I had high hopes of Dusk even though I’m generally not big on war novels, and I absolutely loved it.

We’re thrown right into the middle of the war; Sebastian preparing to go over the top at The Battle of the Somme, the most famous and bloodiest fight of the Great War. The horror of the trenches and the oncoming battle was so vividly described that I just felt an overwhelming sense of dread and sorrow during his chapters. Somehow, seeing the soldiers come out the other end, broken and often dead, into the care of Helen made it even more potent. It’s not a situation I can ever imagine and I don't think anyone of my generation ever will be able to, thankfully. Eve Edwards made me feel like I was there though and it was terrifying.

The intensity of the chapters set in the war made the flashback chapters set in the run up to the beginning of the battle were a relief. I loved the slow, soft and tentative pace of their romance. They became friends first, learnt about each other, and grew to trust and care for the other naturally. There wasn’t a hint of insta-love or a case of pure lust; they fell in love the way I want to fall in love. It was gorgeous and so, so refreshing. The way they shared their feelings through art, literature and poetry made me swoon and I just...*happy sigh*.

The sharp contrast between the two sections was shocking. The way that the war and their roles in it made them grow up instantly. Sebastian went from a cheeky art boy to a strong, capable Lieutenant and Helen became driven and strong-minded, but still remained caring and thoroughly in love. then towards the end of the novel their characters evolved even further, damaged by the war and what they’d seen and done. It broke my heart. As it always does when I think about war, it struck me that these were people killing other people for a cause created by people the country had no control over, people sitting somewhere safely while others fight their battles. There was a scene set during the first day of the Somme and one where Sebastian is corralled by two old women earlier in the novel that really drove this idea home.

As you can see, I loved Dusk, but there was one thing about the novel that stopped me from going ahead and giving it five stars: the ending. There’s a cliffhanger as I expected and I had felt it building for the last twenty or so pages so I was ready. I wasn’t ready for the feeling of dissatisfaction I felt when I turned the last however. I came away from Dusk pretty damn frustrated with it actually. It may have simply been a case of me being so involved in the book that I hated that it ended at all, but I felt like I was unfairly left hanging. Now I’ve let it settle for a few days, I feel a bit better about the ending and I still can’t stop thinking about this wonderful book and I’m already counting down the days for news of the sequel.

Dusk is a powerful and evocative of love, war and survival that’s impossible to get out of your head. I can’t wait for Dawn.

For my 2013 British Books Challenge

Thanks to Puffin for providing me with a review copy.