My Most Anticipated Reads - June to December 2013


As book bloggers we’re lucky enough to know a lot about what’s coming up in the book world months ahead of time. I frequently wish my life away in anticipation of a book so I thought I’d share which books of the second half of 2013 I’m counting down the days for.

Most of the covers featured in this post are the US ones as we don’t have one yet! 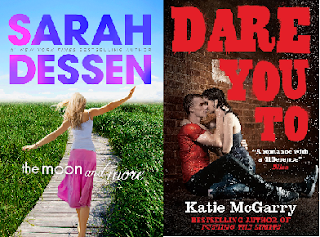 The Moon and More, Sarah Dessen (4th, Puffin)
If you know anything about me, then this doesn’t even need justifying. A NEW SARAH DESSEN BOOK! Emaline is spending her last summer before college in her hometown where everything is familiar; especially her job and her boyfriend. When a brash New York filmmaker and her assistant, Theo, come to town, everything Emaline thought she knew changes.

Dare You to, Katie McGarry (7th, MiraINK)
I loved Pushing the Limits and I can’t wait to be sucked into Katie McGarry’s writing again. This time, we focus on Beth and Ryan. They fought for years to keep their secrets safe and shut every one out. Do they dare let their guard down? 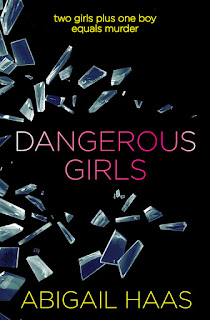 Dangerous Girls, Abigail Haas (18th, S&S)
I’ve been told that is absolutely fantastic and I can’t wait! Anna, Elisa and a group of friends head off the Aruba for Spring Break. When Elise is found murdered, Anna finds herself trapped by her friend’s secrets and the accusations of the police. The truth is more shocking than anyone could imagine... 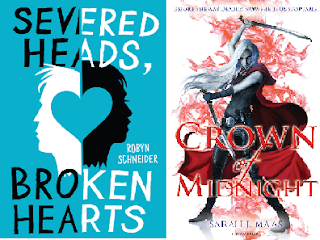 Severed Heads, Broken Hearts, Robyn Schneider (15th, S&S)
Loving the sound of this one! Ezra believes that everyone has a tragedy in their life. After Ezra’s athletic career was shattered by an injury, he sits alone and has no social life. Then he meets Cassidy Thorpe who takes him on all kind of adventures. If his tragedy has already occurred, what happens if misfortune strikes again?

Crown of Midnight, Sarah J Maas (20th, Bloomsbury)
Throne of Glass was an unexpected favourite of last year so I can’t wait for this. Celaena didn’t get her freedom, even after winning the contest and now she is faced with an impossible choice: kill in cold blood for someone she hates or put the people she loves at risk. Celaena must decide which side to fight for and risk losing it all. 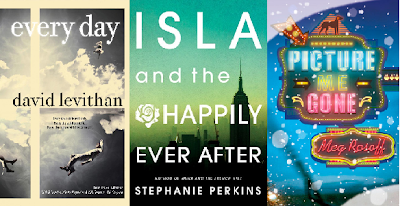 Every Day, David Levithan (2nd, Electric Monkey)
This took the US by storm last year and now it’s being published over here! Each day, A wakes up in a new body without knowing who will be next and he’s used to that. Until he wakes up in Justin’s body and meets Justin’s girlfriend, Rhiannon.

Isla and the Happily Ever After, Stephanie Perkins (17th, Dutton)
I love Stephanie Perkins’ books. Josh and Isla are beginning their senior year and fall in love with the backdrop of Paris. Intertwined with Anna and Etienne and Lola and Cricket, will a happily ever after be a reality?

EDIT: Isla and the Happily Ever After has now been pushed back to a provisional date of May 2014, as explained by Stephanie perkins on her blog. I had this all written and scheduled long before the post went up so sorry for any confusion!

Picture Me Gone, Meg Rosoff (5th, Puffin)
My love for Meg Rosoff’s books is only slightly less than my adoration for Sarah Dessen. Yeah. Mila is on a roadtrip across the US with her dad looking for his best friend. She finds something more in the searching that she ever will in the finding. 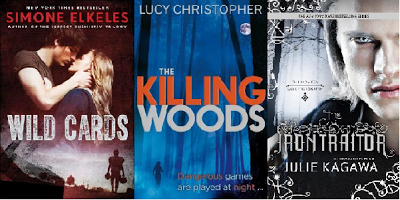 Wild Cards, Simone Elkeles (1st, Walker US)
I do love me some steamy, contemp romance and Simone Elkeles does it perfectly! After being kicked out of boardng school, Derek is forced to live with his ditzy stepmum in Illinois. A football scholarship would get Ashtyn the chance to leave Illinois. After her boyfriend betrays the team, Ashtyn needs Derek’s help – can she trust him?

The Killing Woods, Lucy Christopher (3rd, Chicken House)
Stolen and Flyaway blew me away so I’m desperate to see what Lucy Christopher has in store next! A girl is murdered in the woods behind Emily’s house and her father is a suspect. To try and prove his innocence, Emily tracks down the boyfriend of the murdered girl. But he has secrets of his own.

The Iron Traitor, Julie Kagawa (29th, Harlequin Teen)
Such a Julie Kagawa fangirl... After Ethan’s return from the Nevernever he wants to get back to normal, but when you see fairies and your sister’s a Queen, that won’t happen. His nephew is missing and on the verge of doing something unthinkable. Their fates intertwine and Ethan’s choice will effect faeries and humans alike. 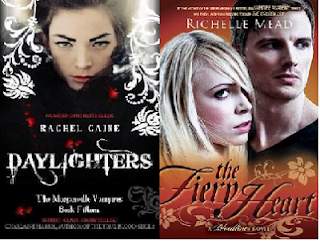 Daylighters, Rachel Caine (5th, Allison and Busby)
Book fifteen and the finale of The Morganville Vampires. I’m going to be really sad when these are over, though I am desperate to find out how it all ends after such a cliffhanger in Fall if Night.

The Fiery Heart, Richelle Mead (19th, Razorbill)
Love his world! Even after the shocking decision Sydney made in The Indigo Spell, the struggle isn’t over. She is pulled in several different directions in the aftermath and her views have changed. She struggles to keep her secret life under cover as the threat of exposure and re-education looms.

I couldn’t seem to find any for December! Are there any books out this December you can’t wait for?

What are your most anticipated reads of the second half of 2013? Are any of these on your lists?