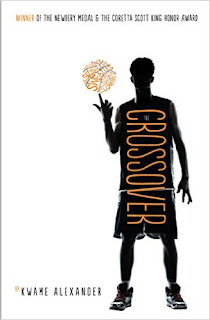 Other Titles by this Author: He Said She Said, Acoustic Rooster and His Barnyard Band, Indigo Bloom and the Garden City, Little Boys Soar

“A bolt of lightning on my kicks…
The court is sizzling.
My Sweat is drizzling.
Stop all that quivering.
Cuz tonight I’m delivering.”

Josh and his twin Jordan have basketball in their blood. They're kings of the court, star players for their school.

But when Jordan meets a girl, the twins’ tight-knit bond is tested – are the rules of the game about to be broken?

The Crossover is a fast-paced, rhythmic verse novel that packs an emotional punch.

Those that even slightly know me with know that sports and me aren’t really even in the same universe so I was a little hesitant about The Crossover as there’s such a focus on Josh and JB’s love of basketball. But it didn’t put me off at all. I loved the passion they feel for the sport, the drive they have to succeed and the way it connects the twins to their former professional basketball player dad. It's in their blood.

For a novel with so few words, there’s a lot going on beside the basketball: the mystery of why their dad stopped playing, the rift forming between the twins when JB gets a girlfriend and Josh gets jealous and fears losing his twin. I’m continuingly surprised by the depths that can be reached through verse novels and even though I had guessed what the novel was building up to put it still packed an emotional punch. There was a moment where I thought there may be tears!

I really enjoyed The Crossover. It’s a quick, engaging and pacy read.