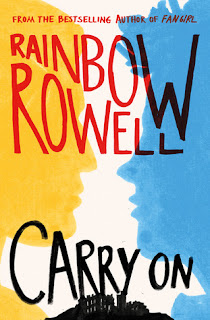 Other Titles from this Author: Attachments, Eleanor & Park, Fangirl, Landline

That’s what his roommate, Baz, says. And Baz might be evil and a vampire and a complete git, but he's probably right.

Half the time Simon can't even make his wand work, and the other half, he sets something on fire. His mentor’s avoiding him, his girlfriend broke up with him, and there’s a magic-eating monster running around wearing Simon’s face. Baz would be having a field day with all this, is he were here – it’s their last year at the Watford School of Magicks, and Simon’s infuriating nemesis didn’t even bother to show up.

Carry On: The Rise and Fall of Simon Snow is a ghost story, a love story, and a mystery. It has just as much kissing and talking as you’d expect from a Rainbow Rowell – but far, far more monsters.

Carry On is easily one of my very favourite books of 2015. It’s funny, charming, surprising and a wonderful ode to fandom.

As was noticed by readers of Fangirl, the story of Simon Snow is pretty much a rehashing of Harry Potter. Simon and Baz’s relatnioship is pretty much Drarry fan fiction, Simon is a hapless Chosen One that blends Harry and Ron and his best friend, Penny, has Hermione-like smarts. And yet it still feels entirely its own world, story and characters, and I loved it all.

It was really cool to see the Chosen One narrated approached from a different angle; it made it very human and relatable. I liked the cheeky approach to the spells – song lyrics, nursery rhymes and famous idioms; the unexpected and clever way the prophecy about Simon worked out; the reveal and final showdown with the Humdrum; the politics of the Magickal world. Everything felt so fleshed out and fully realised that I could have easily believed I was reading the third or fourth book in a fantasy series rather than a standalone (oh please, give me more Rainbow Rowell, please!).

But most of, I loved Carry On for the characters. Penny with her meticulous plans, incredible logic and skill at research and plans was the best friend every Chosen One wouldn’t survive without. Literally. Ppenny’s determination to stay friends with Agatha, Simon’s ex-girlfriend, even though she wants nothing really to do with the magickal world and would rather hang out with her Normal friends. And of course, Simon and Baz. Talk about OTP. I love them so hard. It was really cool to hear from both of their perspectives, especially with Baz’s frustration at his feelings for Simon and how he expected them to end with the death of one of them. His chapters actually ended up being my favourite.

I completely and utterly adored Carry On and, quite frankly, I’m rather upset that I’ve read it already. This will become a comfort re-read – I can feel it.