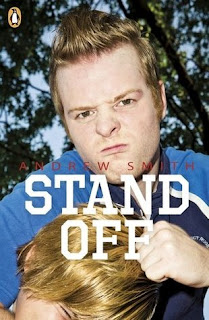 Other Titles by this Author: Grasshopper Jungle, The Alex Crow, Winger

Senior year is supposed to be easy, but for Ryan Dean West there are no guarantees.

He may be the school rugby captain but his new roommate, Sam Abernathy, is a twelve-year-old with extreme claustrophobia and a crush on Annie Altman, Ryan Dean’s girlfriend.

And Ryan Dean has his own problems, too – he’s haunted by things from his past he can't escape, fear of losing Annie, and the fact that sometimes the uncontrollable force of friendship moves under its own power.

A laugh-out-loud story of heart and hope.

I loved last year’s Winger so I was super excited to see how Ryan Dean’s story continued after the shock, emotional ending of the first book.

Ryan Dean is back at Pine Mountain and he’s a fifteen-year-old senior. But it’s not going to as easy a year as he thought it would be. Spoiler warning for Winger so skip this paragraph is you haven’t read it and intend to! Joey’s death has really affected Ryan Dean. He’s constantly anxious, having nightmares and, honestly, I think he’s suffering from PTSD. It was heartbreaking to watch him struggle and refuse to share with his friends how he was feeling. It was even more so when it became the reason behind the way he had been treated his new roommate, twelve-year-old freshman, Sam Abernathy.

Sam unfailingly enthusiastic and nice about everything, he has severe claustrophobia and is too embarrassed to get changed in the same room as Ryan Dean. He’s adorable and brilliant and he’d drive me mad as well! But he’s the best friend Ryan Dean could ask for in the situation. All Sam wanted was to be Ryan Dean’s friend, but Ryan Dean was terrified at becoming friends with someone else because he didn’t want to get hurt again.

Andrew Smith also tackles some other really important issues in Stand Off. There’s a huge discussion about consent and being respectful and that’s one of the first times I’ve seen it discussed so openly in a YA novel narrated by a teenage boy. I cheered. I loved how consistent the message is throughout the novel and that it was taken on board in gay as well as straight relationships. Ryan Dean’s PTSD was dealt with in a way I imagine lots of other teens deal with mental illness: trying to hide and ignore it, and yet when it did come out and he started to share and went to therapy, he started to see the light at the end of the tunnel. It felt authentic and the message was subtle and important.

Even though Stand Off ended perfectly, I would love to read a third instalment set during Ryan Dean and Annie’s first year a Berkley.