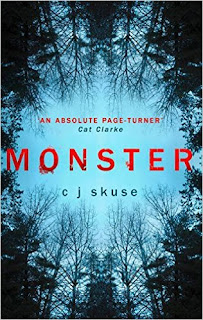 At sixteen Nash thought that the fight to become Head Girl of prestigious boarding school Bathory would be the biggest battle she’d face. Until her brother’s disappearance leads to Nash being trapped at school over Christmas with Bathory’s assorted misfits.

As a blizzard rages outside, strange things are afoot in the school’s hallways, and legends of the mysterious Beast of Bathory – a big cat rumoured to roam the moors outside the school – run wild.

Yet, when the girls’ Matron goes missing it’s clear that something altogether darker is to blame – and that they’ll have to stick together if they hope to survive.

I’ve been a fan of CJ Skuse’s novels since her debut, but Monster, a dark, tense and immensely fun YA horror, is by far my favourite.

Bathory is the perfect setting for a YA horror novel, especially an isolated one where abandoned over Christmas in the biggest snowstorm in decades. The novel gets progressively creepier and creepier as the girls become embroiled in the fearful legends of the Beast of Bathory. I'm a bit of a wuss really, but I didn’t want to stop reading this; it’s addictive and so easy to read. I was desperate to find out how the girls’ would entangle themselves with the beast and who would make it out unscathed.

My favourite part of Monster is the leading lady, Nash. She's the ultimate good girl. Nash spends her free time running around after her teachers, doing chores and looking out for the other girls in the school in an attempt to be made Head Girl, but inside she’s angry and scared and incredibly real. And so is Maggie, the resident troublemaker at Bathory. She's fiery, outspoken and an unrepentant prankster and I love her. In fact, there’s not a girl in this who is glossed over and polished, perfected and refined out of their being a teenager in their speech, personality or thoughts and it was so refreshing. Go CJ!

I completely loved Monster. It's the perfect Halloween read and for the dark and dreary nights ahead.

Thanks to Mira for the review copy.