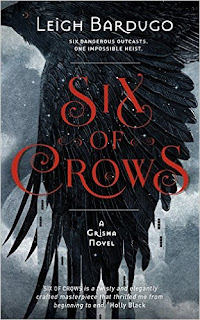 Other Titles by this Author: Shadow and Bone, Siege and Storm, Ruin and Rising

Criminal prodigy Kaz Brekker has been offered wealth beyond his wildest dreams. But to claim it, he’ll have to pull off a seemingly impossible heist:

Retrieve a hostage
(who could unleash magical havoc on the world)

Survive long enough to collect his reward
(and spend it)

Kaz needs a crew desperate enough to take on this suicide mission and dangerous enough to get the job done – and he knows exactly who: six of the deadliest outcasts they city has to offer. Together, they just might be unstoppable – if they don’t kill each other first.

I thoroughly enjoyed the Grisha trilogy, but Six of Crows was completely brilliant.

Set two years after the Ravkan civil war and across the True Sea in Kerch, Six of Crows feels like a very different world to Alina’s. Where Ravka is traditional and a relic of the old world, Kerch is a gritty port city powered by trade, gangs, the pursuit of money and where Grisha are enslaved, criminalised and treated as animals. The whole novel feels very different but there are Easter eggs for the trilogy littered throughout which is lovely, but they're not something that would jump out at those who haven’t read it and ruin the story or anything; they are easily separated.

All six of the Crows are damaged, broken and morally lacking a lot of the time, but I loved them all! Told in third person and split between the POVs of Kaz, Inej, Matthias, Jesper and Nina, we get to see the epic heist from all angles and I can't even begin to imagine the planning and precision in plotting that writing this novel must have required. It was so tightly plotted and the way that Kaz kept information back from the rest of his crew and drip fed it whenever he felt like it came across so brilliantly and it caused some excellent plot twists.

I don’t really want to say much more about the ins and outs of what makes Six of Crows so wonderful because I think I enjoyed it all the more going in to it practically blind and you should too!