From Page to Screen: The Help 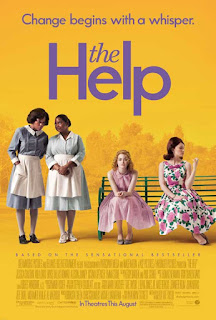 WHAT’S IT ABOUT?
(Summary from the 2010 Penguin paperback)

Enter a vanished world: Jackson, Mississippi, 1962.
Where black maids raise white children, but aren’t trusted not to steal the silver…

There’s Aibileen, raising her seventeenth white child and nursing the hurt caused by her own son’s tragic death; Minny, whose cooking is nearly as sassy as her tongue; and white Miss Skeeter, home from college, who wants to know why her beloved maid disappeared.

Skeeter, Aibileen and Minny. No one would believe they’d be friends; fewer still would tolerate it. But as each woman finds the courage to cross boundaries, they come to depend and rely on one another. Each is in search of a truth. And together they have an extraordinary story to tell…

After having The Help on my shelf for years, I finally read it last month and I loved it so I finally knew it was the time to watch the adaptation – a DVD that my mum bought immediately after reading the book and trying to get me to read it.

As expected, the movie moves a lot faster than the novel does, launching straight in Skeeter getting her job writing the Miss Myrna column in the local newspaper and getting the idea for her book exposing the true experiences of the help in Jackson. Though the timeline is moved around a little and there isn’t the same build up and level of need for her to do something, The Help retains the feeling of the book. The warmth, humour and friendship between Aibileen and Minny and later Skeeter were there in spades and the film allowed us to laugh at the horror of Miss Hilly instead of the violent hatred I felt for the truly vile book-Miss Hilly. I think making her into a character who could be ridiculed hammered home the ridiculousness of how the maids were treated in a subtle but still powerful way and I thought it was really cleverly done. 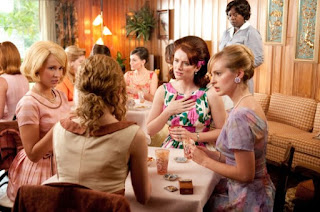 Instead of a growth into noticing the way that the maids and African-American community in Jackson are treated, Skeeter is shown as an ally from the off and it’s in stark contrast to her friends, family and peers. Emma Stone’s Skeeter is actually just plainly a little more than the Skeeter in the novel. Stone brings out the sarcasm, wit and awareness that is glimpsed in book-Skeeter and fully fleshes it out. I’d actually go as far to say that I preferred film-Skeeter and she matched Minny and Aibileen in narration that way, rather than lagging slightly as she did in the novel. Speaking of Minny, I listened to the audiobook of The Help and Minny was voiced by Octavia Spencer who played her in the film as well! It was so strange to find her voice familiar but it was lovely as Spencer clearly knew Minny inside and out. 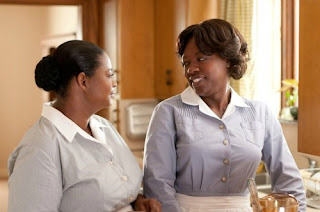 Minny’s struggles with her husband’s domestic abuse were a lot bolder in the film and it played out a little differently, but for the best, I think. There were a few other instances in the novel such as a black man being blinded and another killed that were played down or omitted in the film which meant that the spur to write Skeeter’s book lost the sudden surge of power and determination behind it from the maids. It also felt a little like a disservice to representing the people and situations that Skeeter was trying to air. The same went for the maid who raised Skeeter, Constantine. I know there wasn’t really time in the film to explore it fully, but for me, Constantine’s back story and the reason she left Skeeter’s house was the most powerful moment in the novel and I was sad to see it go. It was the bit that really punched me in the gut and I think it would have been incredibly powerful to see on screen. 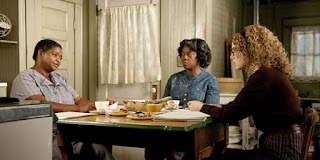 Just like the book, The Help is an important look into the lives of the people living in the South during the Civil Rights Movement, told with warmth, humour and a focus on love and friendship. Gorgeous.