We Are All Made of Molecules, Susin Nielsen 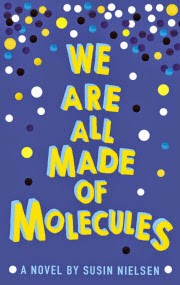 Ever since the first proof copies started coming through letterboxes, all I’ve heard about We Are All Made of Molecules is how beautiful and sweet and funny it is. It’s all true.

Stewart and Ashley couldn’t be more different and now they’re under the same roof and their parents are madly in love. Stewart is 13 and he’s Gifted. He’s polite, kind, insanely clever and tells a great geeky joke. Ashley is 14. She’s the queen bee of her grade, has the perfect wardrobe and her sights on the gorgeous new boy. Unsurprisingly, they clash big time.

I actually really loved both characters. At first I was expecting to really dislike Ashley – she’s mean and angry and selfish, but she’s a 14 and that’s HARD. She’s struggling with her parents’ split, she’s angry at Stewart and his dad for moving in, she struggles at school (academia isn’t her thing) and she’s fighting to stay at the top of the social ladder, pushing her friends down before they can topple her. And she has a huge crush, as well. I really felt for her. Ashley isn’t inherently mean, she just has a lot to deal with and she does that in the wrong way, but she’s hurting and it makes sense.

Ashley’s situation became even more important as she started seeing the aforementioned new boy, Jared. Even though he’d been bullying Stewart, Ashley becomes immediately wrapped up in him, until the cracks start to show. He’s pushy and forceful, he’s cruel, he’s homophobic and a complete shit. I loved how Jared’s actions demonstrated so clearly that Ashley wasn’t mean at heart – she just made a fair few mistakes – whereas Jared is disgusting. I hated the way that Ashley let him get way with in the beginning as that’s what she was supposed to do. It made my heart ache. Luckily, Stewart was able to sweep in.

Early in his school career, Stewart had been moved to a school designed specifically to cope with his advanced intelligence and lack of social skills, but real high school is a jungle. And yet he stayed true to himself and fought for his friends and his new family. I definitely think this difference has to do with intelligence, but also in socialisation of gender – boys can generally get away with being a little weird, for girls like Ashley, that’s social suicide. He knew what Jared was doing and saying was wrong and he acted on it. He defended the girl that had been nothing but mean to him since he moved in because it was the right thing to do.

Against all of the struggles with moving from his childhood home and forging a new family, Stewart is also grieving the loss of his mother still. The guilt he felt at moving into Caroline and Ashley’s house and putting his old life into storage tore at my heart – I really do understand how that feels – and how he felt the need to take a few minutes every day just to think or her and remember her, wrapped in her old afghan broke my heart. Losing a parent is impossibly difficult and moving onto new parts of your life without them is even harder in some ways. I think Susin Nielsen’s depiction of grief was picture perfect and she turned Stewart’s love and grief for his mum into something so lovely and so sad. So wonderfully done.

This review is both a bit rambly and a bit vague, but what I’m trying to say is that We Are All Made of Molecules is a sweet, funny, touching and incredibly important book. It’s a story of family, friendship and being brave enough to stand up for yourself and those you love.