The It Girl, Katy Birchall 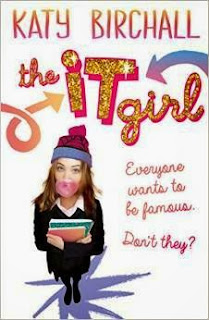 1. To recreate famous film scenes with Dog (her pet Labrador) such as the lift from The Lion King during that ‘Circle of Life’ song.

3. To keep her very first and only two school friends by not doing anything in her usual manner of socially inept dork and outcast.

4. To find out if points 1 and 2 constitute being socially inept – or outcastish.

5. To find a cupboard to hide in with Dog (preferably for life) after her dad gets engaged to one of the most famous actresses ever, the paparazzi move in and the whole world is on the brink of discovering why no one wants to be friends with Anna…

I honestly didn’t have any expectations of The It Girl other than that it was supposed to be funny, and boy was it! It was exactly what I needed.

When I picked up Katy Birchall’s debut, I was in the middle of a classic novel that I’m trudging through and after a string of distinctly ‘meh’ novels that I wasn’t too bothered by. Then Anna came stumbling into my life, being dragged along by Dog and I didn’t stop smiling until I finished reading. She’s a delight to read about. A propensity for setting things on fire, saying stupid things and generally embarrassing herself, Anna is the spirit animal of most teenage girls. Marvel, movies and her Labrador Dog are her favourite things in the world and she’s genuinely worried that if she doesn’t start being cool her only two friends will ditch her.

This only intensifies after her dad reveals that he’s engaged to a legendary movie star and ends up in close proximity to her It Girl daughter, Marianne, and her failings are displayed in the papers. I think that it would have been really easy to put the novel’s conflict in the introduction of Helena and Marianne or between Anna’s mum and dad and I’m so glad it wasn’t that way. I loved that though they aren’t together, Anna’s parents are best friends and together with the Montaines, they make a family. I love that in The It Girl a disjointed and unconventional family doesn’t make an unhappy one, in fact, it’s the opposite. I really loved the ragtag group they made and the genuine affection that built between them, especially between Anna and Marianne.

Marianne is a party girl. She’s beautiful and poised and she is often splashed across newspapers and magazines doing something extremely cool. Who wouldn’t be intimidated by that?! I really liked that we got to see underneath that aspect of Marianne and that she even hinted at the difficult parts of being constantly in the spotlight – it humanised her so much and really made me cheer on her friendship with Anna.

Friendship in general is a huge part of this novel; it’s one of the reasons why I enjoyed it so much! Anna only moved to London a year or so ago and she was pretty much a loner until Jess and Danny swept her under their wings. I really liked their little group. Though Danny is a tad underdeveloped, he had some really nice input when Anna really messed up with Jess. But Jess is brilliant. She’s the best friend every teenager needs: funny, loyal and loves you even when you admit to dancing with a balloon at a school dance. The real strength in their friendship came about when it was threatened, however. In a classic teen movie fashion, Anna new status as an It Girl drew the most popular girl in school to try and get what she could out of Anna. Sophie is your average catty, needlessly mean popular girl and Anna couldn’t quite see that she was being used, but Jess could. Though she warned Anna about it gently, she wasn’t mean about, she didn’t ditch her, she just waited for Anna to wise up to it. That to me is genuine friendship and it was so lovely to see.

Tied into the theme of friendship is the idea of embracing who you are. Jess and Danny love Anna for who she is, and so do her family, but it’s not quite good enough for Anna at first. It’s natural to want to be at the top of the high school food chain, but it’s not at it’s cracked up to be. I really enjoyed seeing Anna realise that she actually had it really freaking good with her friends and family – she didn’t need to be popular after all. I think this is so important for teenagers to learn – in fact, I need to learn it! – and Anna is the perfect character to deliver that message with charm and humour.

The It Girl is a charming, funny story of friendship and embracing who you are. I’m so looking forward to more from Anna.

Thanks to Egmont for the review copy!