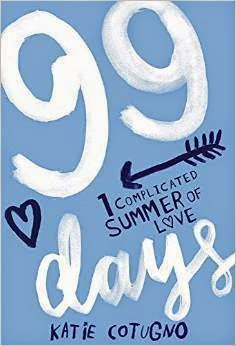 Other Titles by this Author: How to Love

Last year, Molly Barlow did something terrible. Then, her mother wrote a bestselling book about it. And so, everyone in their hometown found out that Molly cheated on her childhood sweetheart, the love of her life, her best friend, with his brother.

And now, Molly has ninety-nine days to endure before she can escape to college.

99 days of being the most hated person in town.
99 days to heal the hurt she’s caused.
99 days to figure out what she wants and who she loves.

Katie Cotugno’s debut, How to Love, was my favourite book of 2013 so I was rather nervous about starting 99 Days. But it was just as full of life, flawed and lovable characters and a difficult, sticky love story.

After escaping to Arizona for a year at boarding school, Molly is back in Star Lake for her last summer before college. And she’s got a lot of baggage and a lot of resentment. Two years ago, Molly slept with the older brother of her childhood sweetheart and all was revealed when her mum wrote a bestselling romance novel about it and then opened up about the story’s origin in People magazine. The slut-shaming that Molly received was enough to make my stomach turn. Such double standards. Even Gabe himself admitted that she was getting attacked while he was barely scathed.

Molly faced her old school friends, total strangers and her former best friend calling her a ‘slut’ or a ‘dirty whore’ and it was awful. It took Molly until the end of the novel to finally realise that yes, she had done wrong, but the Donnelly brothers were equally wrong in their actions over the past two years. She took ownership of her actions and she fought back and I was so pleased to see it that I almost fist-pumped. Molly took her story back for herself and it really made the ending. Some avenues were closed to Molly, Gabe and Patrick and the summer is over, but there’s still a possibility for Molly and the Donnelly brother she truly loves. Maybe.

Katie Cotugno writes about love in all its difficult, contrary, confusing intensity. The strain that the novel and interview put on Molly’s relationship with her mum, the necessity of friendships, the tangles of first love and second love, the distinction between loving someone and being in love with someone. Every incarnation is blisteringly real and I couldn’t help but get involved with these characters.

I adore Katie Cotugno’s writing, characters and gritty love stories. She’s earned herself a spot on my auto-buy list and I can’t wait to fall in love with whatever she writes next.