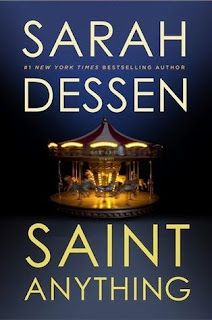 Other Titles by this Author: That Summer, Someone Like You, Last Chance, Dreamland, This Lullaby, The Truth About Forever, Just Listen, Lock and Key, Along for the Ride, What Happened to Goodbye, The Moon and More

Peyton, Sydney’s brother, has always been the star of the family, receiving all of the attention and, lately, concern. His reckless behaviour culminates in a shock accident and a jail sentence, which casts Sydney adrift, searching for her place in the family and the world.

Sarah Dessen is my very favourite author and I never expect less than perfection from her and Saint Anything was even more than I was expecting. It’s up there with my very favourites of hers.

For me, one of the major strengths of Sarah Dessen’s novels is her characters. Sydney is no exception. They are all so vividly real that I always get to the end of the novel feelings as if I’ve known them for years; it’s as if I could turn around and not be surprised to see them standing next to me. They are complex and flawed and have histories and families and friends and all of the problems they bring. I honestly don’t think there are many authors that flesh out their supporting cast in the way that SD does.

The Chatham’s are such a bright, lively family. I fell in love with them immediately. They actually reminded me a little of the Garretts in Huntley Fitzpatrick’s My Life Next Door; they’re chaotic, messy, a big family and all tangled together by love and loyalty. Layla is so bold and funny and forthright and I clicked with her straight away. She’s that kind of person that you’re just drawn to and I really wish that she existed! And with Layla comes her older brother Mac. Oh, Mac. He’s going to be a legendary Dessen boy; I’d even put him on a level with Wes (The Truth About Forever) – that’s how amazing this guy is. He’s quiet and understanding and he sees Sydney in a way that she’s never felt seen before.

I completely understood Sydney’s feelings of being invisible. I think it’s difficult not to feel invisible at some point during your teenage years and Sarah Dessen pin points the feeling perfectly. It’s heart-breaking to see that not even her parents saw her; they were blinded by her brother, Peyton. There’s something about Sarah Dessen’s characters, emotions and stories that get under my skin like nothing else. Regardless of the heroine and her situation or her personality, I always feel a deep, definite connection with them; each novel represents a part of me.

Sarah Dessen does romance in a way that bowls me over subtly. Mac and Sydney’s friendship slowly simmers into a deep, genuine romance that makes my heart skip in the most delicious way. She always sets a real foundation for every relationship; there’s always more than just physical attraction or coincidence or loneliness involved and it just makes it all the easier to become invested. And on another note, the first time we see Mac he’s wearing an Anger Management radio show t-shirt! I do love the way she ties her novels together like that – it’s nice to catch up with characters I fell in love with years ago.

Saint Anything is distinctly Sarah Dessen and everything that she’s loved for. I worship her.