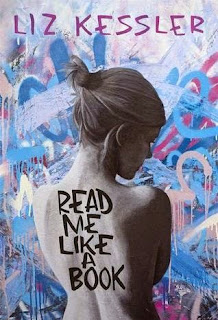 Other Titles by this Author: Emily Windsnap series, Philippa Fisher series, A Year Without Autumn, North of Nowhere, Has Anyone Seen Jessica Jenkins?

Read Me Like a Book was a novel fifteen years in the making for Liz Kessler and you can really feel that fifteen years’ love and heart went into it. It’s gorgeous.

As soon as we meet Ash, she’s in a bit of a pickle. Stuck in the middle of her parents as their marriage disintegrates, she’s tired of being ignored, of being their go-between and of the constant gloom in their house. I can only imagine how much worse that must be if you’re an only child with no one to shoulder the misery with. It’s no wonder she’s not all that bothered by school, even though her A-level exams are looming and she has no idea what she’ll do come the summer. It’s a good job her birthday brings a distraction in the form of a pretty boy.

Ash’s relationship with Dylan seems to be going okay, if a little quickly, but she’s not really all that fussed. And the pushier Dylan gets, the more distant Ash feels. It made me so upset to watch her go along with things she really didn’t want to do just because she felt she should. But at the same time, she also wasn’t afraid to tell him to back off which I think is such an important message to have in YA. So, so important.

It’s not long, however, until Dylan is replaced in Ash’s mind by her fun, young and engaging English teacher, Miss Murray, who really sees Ash and believes in her. I really liked that Ash’s feelings for Miss Murray and the LGBT element of the novel evolved slowly and steadily. She had to work out what she felt and what all that meant which isn’t always like a lightning strike! Teacher/student romances are some of my favourite relationships to read about and I really loved the way this turned out. It could have gone in many directions, but I think this was true to life and a responsible way to handle a delicate topic. !SPOILER ALERT! I loved that Miss Murray pulled away, that she never officially said anything to Ash that could have been taken the wrong way, that reading through Ash’s perspective could have meant that actually it was just her bias and wishful thinking that made me as a reader think that she had feelings for Ash too. As I said, beautifully done. !SPOILER OVER!

As heroine’s go, Ash is pretty stellar. She’s clever and funny and vulnerable but she’s also gobby and abrasive and makes some very poor choices that could get her into serious trouble. I think she’s pretty representative of lots of eighteen year old girls at the moment. Forced into education when you don’t really want to be there, bored by the teaching and the dry content, making stupid decisions as a distraction from some seriously difficult home and personal issues. But Ash had a teacher who believed in her, who encouraged her and made her realise that she could achieve as week. Sadly, not everyone gets that. I do wonder how different an experience school and the results of it would be if there were better teachers.

Read Me Like a Book is beautiful novel of discovery, love, family and friendship and I thoroughly enjoyed it.