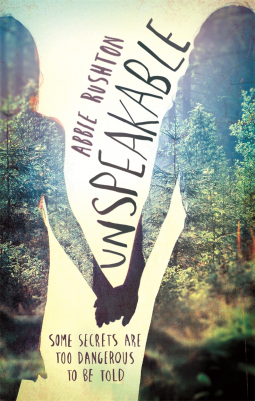 Pushing away the people she cares about is just a small price to pay. Because there are things locked inside Megan’s head – things that are screaming to be heard – that she cannot, must not, let out.

Then Jasmine starts at school: bubbly, beautiful and talkative Jasmine. And for reasons Megan can’t quite understand, life begins to look a bit brighter.

Megan would love to speak again, and it seems like Jasmine might be the answer. But if she finds her voice, will she lose everything else?

Abbie Rushton’s debut is an LGBT story with a mysterious difference; Unspeakable is a quick, easy books to read and it whiled away my evening quite nicely.

Megan’s mysterious secret is brought up straight away and immediately tied to her elective mutism. She wants to speak and she tries but her mind shuts down the option as soon as she’s close. Megan stays silent through fear and shame of the events surrounding the death of her best friend. The mystery is a far bigger concern in the novel that the burgeoning relationship between Jasmine and Megan. Though Megan’s feelings are hinted at from fairly early on, it’s not made too big a deal of until about two thirds of the way through Unspeakable and nothing happens about it until even later on.

I like how understated it is, but I also think it was a little too smooth. Though Megan had to come to terms with her feelings, there was very little form Jasmine, nothing much from their parents or their friends at school. Either it was just a side note to Megan’s silence or it was executed with rose-tinted glasses on. I think it stuck out more because of the bullying Megan received from her ex-bestie, Sadie; though they did reach a sense of mutual respect at the end of the novel, it still didn’t quite sit right.

It was a good job that bubbly, endlessly-speaking Jasmine and frustrated, naive Megan were such endearing and engaging characters because I’m not sure they were given enough justice at the end of the novel. Something just didn’t real right to me. With the reveal of the events causes Megan’s silence and her finally speaking again, the cementing of hers and Jasmine’s relationship and the end of the bullying, it was a very neatly wrapped up ending, and a little anti-climactic in a way. And yet I still enjoyed Unspeakable and flew through it in only a few hours.

With its strong prose and engaging characters, Unspeakable is a solid introduction to UKYA and LGBT fiction for younger teens.

Thanks to Atom and NetGalley for the review copy.