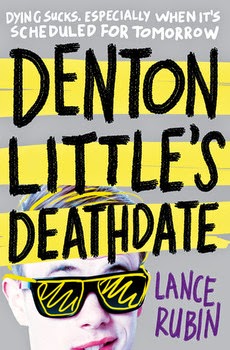 Imminent death has never been so funny! Denton Little’s Deathdate takes place in a world exactly like our own – except everyone knows the day they will die.

For Denton, that’s in just two days – the day of his senior prom. Despite his early deathdate, Denton has always wanted to live a normal life – but his final days are filled with dramatic firsts. First hangover. First sex. First love triangle (the first sex seems not to have happened not with his adoring girlfriend, but his best friend’s sister. Though he’s not totally sure – see first hangover).

His anxiety builds when he discovers a mysterious purple rash making its way up his body. Is this what will kill him? Then a strange man shows up at his funeral, claiming to have now Denton’s long-deceased mother, and warning him to beware of suspicious characters…

Suddenly Denton’s life is filled with mysterious questions and precious little time to find the answers. Debut author Lance Rubin takes us on a fast, gripping and outrageously funny ride through the last hours of a teenager’s life as he searches for love, meaning and (just maybe) a way to live on…

I had really high expectations for Denton Little’s Deathdate: it promised a unique plot and hilarity, and while it was definitely unique, it missed the mark on other things.

The concept of knowing your deathdate – via DNA, bloodwork and SCIENCE – from early on in your life is fascinating. The way it could change your outlook on your life, your accomplishments, the people around you, but also the way you see other people is something that really interests me, and while Denton spoke a little about how he’d always made sure he lived as normally as possible, it was barely looked at. There was so much scope there to explore that side of things and also how scary it can be to not be forewarned about death like in the ‘before’ of Denton’s world. I would have loved a little exploration of that; whether Denton would have preferred to know that he would die at seventeen or not because I honestly couldn’t say if I would want to know or not.

I thought that maybe the lack of all that would lead to lots more humour, but I have to say that it wasn’t nearly as funny as I was promised. I think Paolo is absolutely hilarious and I love him, especially when he and Denton would get into their little best friend banter battles, but I think that’s where the humour ended for me. Luckily there were other elements of the novel that I thoroughly enjoyed.

Even with only a week until his deathdate, Denton is plodding along quite happily, cramming in getting drunk, experiencing a hangover, having his funeral, losing his virginity and completely confusing himself over girls. And yet the novel moved at the nice, normal pace of a contemporary, until the part of the novel. Then it all exploded. I have to admit that I didn’t really have any idea what was going on but I was enjoying the ride! Lance Rubin turns everything on its head in the close of the novel – the rules of the world, the characters and the whole point of Denton’s story, really, and it was brilliant!

When I first heard there would be a sequel I was a little confused, but after that cliffhanger, bring it on! Denton Little’s Deathdate is thoroughly good fun and I’m sure the next one will be too!

Thanks to S&S for the review copy!