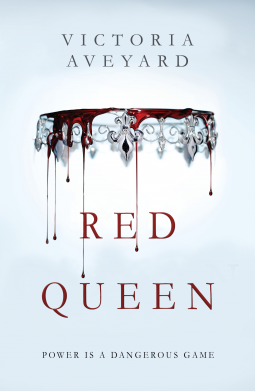 Fearful of Mare’s potential, Silvers hide her away in plain view, declaring her a long-lost Silver princess, now engaged to a Silver prince. Despite knowing that one misstep would mean her death, Mare works silently to help the Red Guard, a militant resistance group, and bring down the Silver regime.

I have to admit that it was the fuss of the Epic Reads ladies that led me to this one (again) and though I had a rocky start with it, I thank you Margo and Aubrey.

At first, the set-up of the world and the division between the Reds and the Silvers reminded me a little of The Jewel. The Stilts lies just ten miles away from the The Palace of the Sun, the summer house of the royals, but the distance between them is staggering. The power of the Silvers means that they rule the Reds with an iron fist; the Silvers have everything and the Reds have nothing. I have to admit that while all of this was being explored and Mare was setting up the events that would lead her to be imprisoned in the Palace, I wasn’t too invested. And then Mare did something extraordinary and I was suddenly hooked.

Within moments of meeting the King and Queen it’s obvious that they are evil, but the princes, Maven and Cal, are so difficult to define. I loved the ambiguity of good and evil; the wrestle between a person’s teachings, their heart and their morals; the shadow of duty. It’s gloriously indistinct and I loved being on tenterhooks and not knowing who to trust. And yet a staggering betrayal still punched me in the heart. Now that is plotting and characterisation, right there! You know what? I’m going to leave it there. Red Queen is too good and I don’t want to ruin a single second of it.

Red Queen is a debut bursting with betrayal, jealousy, love and rebellion and it’s fantastic. YA fantasy is really on the up at the moment and Victoria Aveyard is going to be one of the leaders of the pack.

Thanks to Orion and NetGalley for the review copy.