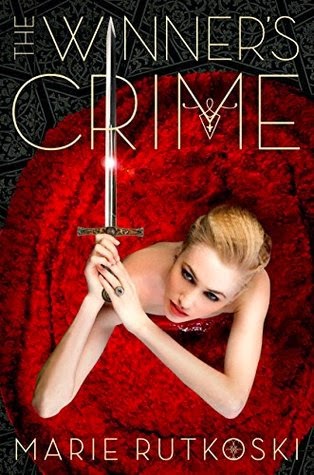 Other Titles by this Author: The Winner’s Curse

Lady Kestrel’s engagement to Valoria’s crown prince calls from great celebration: balls and performances, fireworks and revelry. But to Kestrel it means a cage of her own making. Embedded in the imperial court as a spy, she lives and breathes deceit and cannot confide in the one person she really longs to trust...

I devoured The Winner’s Crime. I barely even took a breath to write notes for my review which I usually do faithfully so this review may be a little rambly...

We pick up with Kestrel shortly after the end of The Winner’s Curse. She is at the palace, preparing for her wedding to the prince and agonising over the decisions she made in Herran. Arin is now the Herrani governor and, quite honestly, a little confused about what went down at the harbour. These two have serious issues with honesty and mind games, all in the name of love. Arin is blinded by his anger at Kestrel and her new position as empress-to-be against what she actually did for him. And yet when he tries to figure it out Kestrel shoots him down in order to protect him. It’s all very tense and deliciously frustrating.

I loved the extra dynamic of Kestrel’s place in the palace in The Winner’s Crime. The expectations that were held over her head in book one by being the general’s daughter are intensified ten-fold when engaged to the prince. I just wanted to wrap her up in a hug and take her back to Herran and give her back her life. It was really interesting to see the roles reversed: Arin as the one in charge of a territory and Kestrel being the open captured and manipulated, her freedom all but gone. The politics she had to play to keep herself and those she loves safe had me on the edge of my seat, reading furiously to find out what would happen next.

I loved The Winner’s Crime in all its twisty, frustrating glory and after that killer cliff-hanger I need the final instalment right now. Please?

Thanks to Bloomsbury and NetGalley for the review copy.