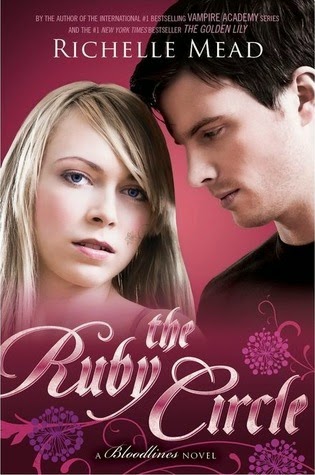 I know that the end had to come eventually so it was so good to see out this world and these characters with a finale like The Ruby Circle. Brilliant!

When we left Sydney and Adrian at the end of Silver Shadows they had married in Vegan and fled to Court, begging Lissa to give them protection from the Alchemists. A month later and their hiding is starting to affect them. Sydney and Adrian have been a strong couple, with even stronger personalities from the very start so it wasn’t a surprise to see them buckling under the pressure a little. Their bickering over Adrian’s use of spirit, Sydney is folding under the lack of freedom and they’re both going mad that they can’t help searching for Jill. I really liked that development f their relationship; I think it made it stronger and so much more authentic, as well as confirming my belief that actually, they really are going to make this work in the long run. It was reassuring.

But, of course, they don’t stay put for long. After a surprise visit and a very interesting use of magic, they are separated once again and the search for Jill has been pushed up to 11 – they have a lead. It was good to see Sydney back to her full strength and using her magic again after the horrors of re-education in Silver Shadows. She is an incredible heroine; I can’t believe I ever thought she wouldn’t be as wonderful to read about as Rose!

Speaking of Rose, it was lovely to have her and Dimitri more centrally in the plot for the final (as far as we know) glimpse into this world. They’re still happy together and working miracles as Guardians, thankfully. I was also very shocked, but pleased, that we learned a little more about Dimitri in The Ruby Circle - linking this book back to the first Vampire Academy book. Lovely. And then something was revealed that shook the whole gang to the core. Something completely impossible; it’s a fantastic twist on the lore and mythology that we learnt about at the very beginning as well. All I can think now, however, is all the possibilities for new stories it opens up! I’m not really ready to leave this world and Sydney, Adrian, Rose, Dimitri, Jill and Eddie behind. I still want more!

It was lovely to see everyone get their happy ending though, and I know there’ll likely be comments about the cutesy happy ending, but frankly dear, I don’t give a damn. It was perfect.