Me and Mr J, Rachel McIntyre 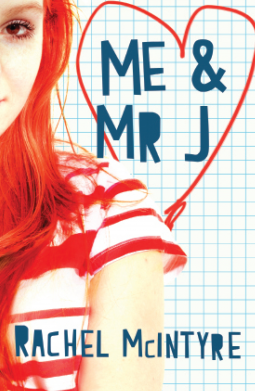 Lara’s life has changed radically since her father lost his job. As the eldest, Lara tries to keep upbeat, and the one outlet for all her problems is her diary where she can be open about how dire everything is at home, and worse, the fact that she’s being horrifically bullied at school.

Written in my favourite format of a diary and featuring a student/teacher relationship, I went into Me and Mr J expecting to love it. And while I had some minor niggles, I really did enjoy it.

Lara’s voce instantly drew me in. Snappy, chatty and so likable, I got involved with her life and her thoughts very easily. She has the purpose dose of stroppy, resentful, naive and being completely relatable to make her the perfect picture of a fifteen-year-old having a seriously hard time. Her parents’ company went bust so they lost their home and are now struggling to afford to live, and they won’t stop fighting about it. Now her school uniform is ratty, her mum is having to clean the house of Molly, the bitchiest girl in school and quite frankly, it sucks for her at the moment. And Molly is bullying Lara because of it.

It was horrifying and it got progressively worse throughout the novel. It was ridiculous how only Mr Jagger noticed what was going on; her parents didn’t even realise that something was wrong and I know that they had a lot on their minds, but still... I think that they massively let Lara down. They practically ignored her most of the time and never really communicated with her at all – it was so painful to read at times. The bullying ended up having an effect on every part of Lara’s life, especially her feelings for Mr Jagger. I don’t doubt at all that they were genuine, but him being the only solace in her day, the only person that saw her qualities and voiced them, the only one that took the time to get to know her strengthened them beyond a crush on a teacher into full-blown love.

Mr Jagger is a character that I found difficult to form a solid opinion on. The fact is: he’s Lara’s teacher and he should not have entered into any kind of relationship Lara, end of. And yet I still kept trying to determine whether his feelings were genuine or not, whether there was any ulterior motive or predatory angle to his actions. Before the pair started something, he put a stop to what could happen, and when it did he often reiterated how bad this would be for him if anyone found out and it just mixed up my feelings every time. And that’s what I love about the books that focus on these types of relationships – I love the opposing tugs of the head and the heart, and the one that Lara and Mr Jagger created was pretty good.

With the epilogue set over a year after the events of the novel, Me and Mr J wraps everything up neatly, but I don’t think that quite does justice to the story. Nevertheless, Rachel McIntyre’s debut is thought-provoking, complex and enjoyable; I’m looking forward to more from her.


As well as getting to read my review, I also have a post from Rachel on controversial topics in YA and why she chose to write about a student/teacher relationship. Over to Rachel!

Reading books with adult themes was- and still is-a rite of passage. When I was thirteen, it was as if someone flicked a switch and overnight, I went from obsessively dreaming of Mallory Towers, to wondering whether Adrian Mole measured his “thing” with a ruler or a tape measure. Sue Townsend’s brilliant series was my first “controversial” read. Judy Blume’s “Forever” came quite soon after, followed by “Flowers in the Attic”, Virginia Andrews’ soap opera that we secretly passed round at school. We were fascinated by the alien world presented here and, if I’m honest, the descriptions of rural poverty and going to the mall seemed every bit as exotic as the references to sex.

I remember spending my summer holidays enthralled by “The Thorn Birds”, “Lace” as well as everything by Jilly Cooper and completely taking them in my stride. Of course, these weren’t YA books, but they were absolute must-reads. I read books when I was a teenager, that I know I couldn’t stomach now; in the same way today I deliberately avoid books that depict child abuse, suicide or sexual violence. As an adult, I have literary no-go areas whereas when I was younger, I think curiosity definitely outweighed the “ick factor”.

Times have changed, today’s teens are savvy, clued up from TV and the internet but I don’t believe the desire to read controversial fiction has gone away. The demand for boundary-pushing TV shows teens’ fascination with gritty, hard-hitting storylines and soap operas are so popular with this age group precisely because they often depict the darker side. Life can be messy, chaotic and confusing.

Events overtake us, we’re left stranded by circumstances and sometimes we make mistakes. Controversial YA fiction empowers teenagers precisely when it doesn’t sanitise or pretend that life is perfect; it shows the dark corners of the world and then tries to shed some light on them. I have had it suggested to me that if “Me and Mr J” was a storyline in Hollyoaks rather than a book, maybe it would be seen as less controversial. Do I agree? I’m not sure. Perhaps.

Like those books I read growing up, “Me and Mr J” has a delicate subject at its heart. Hardly a week goes by without another “Teacher jailed for affair with pupil” headline and, understandably, it is an emotive and divisive subject. Did I find it hard to write about? Emphatically, yes. Creating a totally unreliable narrator (as Lara is) presented so many problems. I needed to show how the relationship could develop but at the same time, convey it is always wrong. Tricky to do when the narrator views it as the only good thing in her life. And that’s why Lara’s cousin, Emma, becomes her confidante: I needed a character to present a clear, unromaticised version of what was going on. Emma is able to interpret the relationship in a way Lara can’t  (or won’t) and provide the moral perspective. And I definitely didn’t want to write either a love story or a grim tale of grooming. Instead, I wanted to take a realistic and thought-provoking look at how it might happen. In “Me and Mr J”, I deliberately avoided the trope of the much older predatory male and maybe if I’d used it, the story would be less controversial. But, for me, it was crucial to convey how exploitative relationships don’t necessarily present themselves as such. A girl like Lara would have the wit to reject the advances of a cardboard cutout groomer. The message readers are left with when Mr J has been justly punished is Lara has been the victim of a man who behaved very, very wrongly.

Teacher/student relationships are always always wrong, legally and morally and the ending of the novel makes this explicitly clear. But just because something is wrong, doesn’t mean it doesn’t happen, as evidenced by the apparently endless newspaper stories. And as long as controversy exists in the real world, then there is a place for it in fiction.