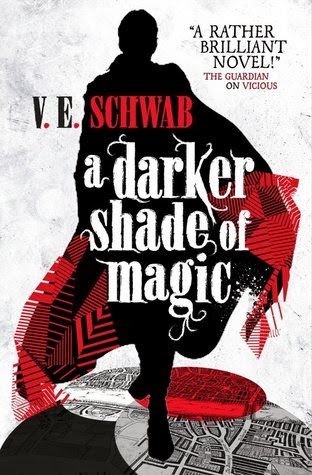 Other Titles by this Author: The Near Witch, The Archived, The Unbound, Vicious

VE Schwab has been praised in the blogosphere endlessly recently and as soon as I heard what A Darker Shade of Magic was about, my decision was made. And to be honest I so should have jumped on the bandwagon earlier!

The concept of this novel is wonderful. I love London so the idea of three separate London’s each with their distinct own history, magic level and society is one I was instantly captured by. The state of each city is a result of the magic in that world and I loved that connection; it bolstered Kell’s repeated claims that magic is dangerous and a living thing. I especially liked that Grey London is very much like our London of 1819 – the smog, the deprivation, the Prince Regent and King George III and windy nature of the city. Perfect! I have no inclination to ever visit the terrifying White London (too much murder and I’m not a fast runner) but I love the sound of Red London. A fine red mist, abundant magic, genuinely nice royalty and Kell.

I have to admit that I was initially really surprised that Kell was a guy; I was completely expecting a heroine, but I was pleased. You don’t come across male leads in YA fantasy too often and it was refreshing. The central relationship to A Darker Shade of Magic was unusual as well. There was no romance. Two chaste kisses, but no real romance or declarations of love or lust and it was fantastic. Kell and Lila have a brilliant and authentic friendship filled with banter and arguments and saving each other’s butts from mortal danger. But it was mostly the human thief Lila saving the powerful magician able to travel between parallel worlds. Go Lila! She’s seriously badass, and though not the most moral of characters, I love her.

I fell in love with the three Londons, the mythology of the magic and Kell and Lila – I can’t wait for more from this trilogy. Go forth and purchase! While you go, I’ll be buying more from VE Schwab.

Thanks to Titan Books for the review copy!