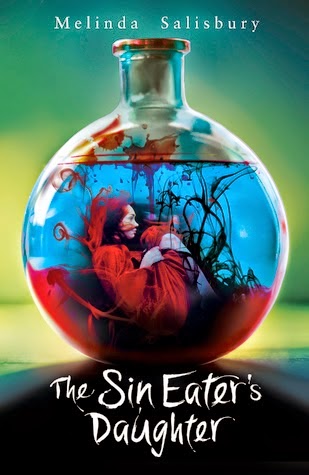 Will Twylla do what it takes to protect her kingdom? Or will she abandon her duty in favour of a doomed love?

Melinda Salisbury’s debut is beautifully written, has a masterfully built world and a kickass heroine. The Sin Eater’s Daughter is a great big win, really.

Within a few words I was sucked into the rich, evocative prose. I was thrown straight into the midst of Twylla’s world; governed by a manipulative queen and controlled by the threat of the Daunen Embodied. Though the world is complex, all of the information that is needed is delivered in a way that’s easy to digest and build up a full picture. I loved that the founding mythology of Lormere is loosely based on the Christian origin story. The Godd ess of Day steals the nighttime skies from the God of Night in the same way that Eve takes the forbidden fruit in the Garden of Eden and the original sin of women so the sins have to be Eaten after death. I loved the way it was put across and the way is was questioned and doubted with a feminist edge. Brilliant!

I actually tend to find religious references in a novel off-putting – they make me uncomfortable – but I didn’t feel that at all in The Sin Eater’s Daughter. I found it fascinating. The idea of sin eating is gross, but so intriguing. I loved discovering what foods represent what sins: seafood for jealousy, coddled eggs for thievery. As Twylla was destined to be the next sin eater after her mother, she knew a lot about the process and it was part of the punishment when Twylla touched the people convicted of treason – they would not have their sin eaten so their souls wouldn’t ascend.

With most fantasy novels comes the promise of domed love, and I do enjoy me some doomed love, especially when it carries danger of discovery. I love Lief. He’s funny, charming and he treats Twylla like a person. The chemistry between them was sizzling and I loved that Twylla’s attraction to him was so physical as well; it’s still worryingly rare for that to be an obvious feature in a YA relationship. Naturally, however, I spent most of their interactions terrified that they would be caught and someone would be killed and it would all go horribly wrong. Though I couldn’t possibly tell you what went wrong... Read it and find out!

I absolutely adored The Sin Eater’s Daughter and I can’t wait for more from Twylla and this world.

Thanks to Scholastic for the review copy!