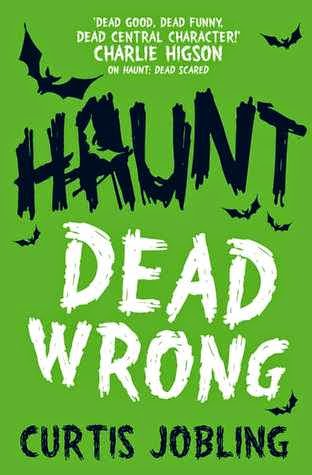 Other Titles by this Author: Wereworld: Rise of the Wolf, Rage of Lions, Shadow of the Hawk, Nest of Serpents, Storm of Sharks, War of the Werelords; Haunt: Dead Scared

Will and Dougie are adjusting to the slight change in their friendship dynamic...

Will’s dead but Dougie can still see him. Weird, admittedly, but there are some positives: solving a murder mystery, becoming a local hero and getting the girl of your dreams are pretty big perks for Dougie.

But what happens when the girl is Will’s crush too? The first (and last!) girl he ever kissed? And why has Dougie’s dad been acting weird ever since Will died? Just as things are beginning to go right for Will, it seems he couldn’t have been more wrong.

I thoroughly enjoyed the first book in this series so I was really rather pleased to find that Dead Wrong is even better than Dead Scared!

Curtis Jobling has a wonderfully chatty, warm tone that even though it’s been nearly eight months since I first met Will and Dougie, they feel instantly familiar again. But there were some dark goings on in Dead Wrong. Will and Dougie are having a few issues at the beginning of the book; there are few things that can cause friends to fight more than a girl, and your dead best friend eavesdropping on your dad and finding out that he has a massive secret... The tension and the slow repair of their friendship were realistic and genuine. It really is nice to read a YA novel that focuses so heavily on friendship – there aren’t enough of them out there.

Dougie isn’t Will’s only friend, though. There’s the Major: a ghostly American WWII soldier who hangs around the hospital. He’s a sassy dude. And so charming it’s no wonder that he had a sweetheart while he was stationed over here. The story of the Major and Ruby was a surprising element to the book; emotional and unexpected. I teared up! One of my favourite things about stories with ghosts in them is the history that comes along with it and I would honestly read a whole novel about Ruby and Major’s burgeoning romance in 1943.