All Fall Down, Ally Carter 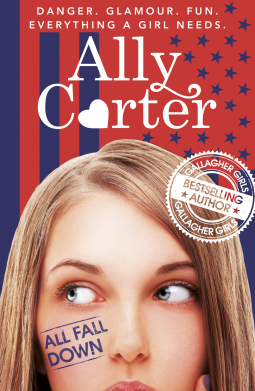 Other Titles by this Author: I’d Tell You I Love You, But Then I’d Have to Kill You; Cross My Heart and Hope to Spy; Don’t Judge a Girl By Her Cover; Only the Good Spy Young, Out of Sight, Out of Time; United We Spy; Heist Society; Uncommon Criminals; Perfect Scoundrels

Everybody wants Grace to put on a pretty dress and a pretty smile, locking out all her un-pretty thoughts. But they can’t control Grace – no more than Grace can control what she knows or what she needs to do.

Because on Embassy Row, the countries of the world all stand like dominoes, and one wrong move can make them all.

There are many, many fans of Ally Carter in the blogosphere so I was super excited when I got an early copy of the first book in the Embassy Row series, All Fall Down, but I was a tad disappointed with it.

Troublemaker Grace has just been sent back to live on Embassy Row in the fictional country of Adria, a place where the ambassadors of the world all work together to keep the peace between countries. It’s not a setting I’ve come across before and I loved the dangerous and delicate politics between the ambassadors and those that have been imposed on their children and grandchildren. As Grace is the equivalent to a bulldozer, it was fascinating to watch the dynamic from an outsider.

All Fall Down was much darker than I anticipated. Grace experiences nightmares and panic attacks in a way that makes me think of PTSD as a result of witnessing her mother’s murder. At first I was a little irritated to see the curse of the dead mum return again, but I eventually got over it when the story took a different turn. With Grace’s sometimes rather unreliable mental state her recollection of the events that night three years ago aren’t really believed by those that could do anything about it.

Though I respected the strong but sympathetic portrayal of PTSD, the fierce friendships, and the shock twist ending, All Fall Down still didn’t live up to my expectations of Ally Carter unfortunately. I may go back and give her Gallagher Girls series a go instead.

Thanks to Orchard and NetGalley for the review copy.