The Worst Girlfriend in the World, Sarra Manning 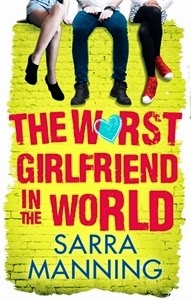 Other Titles by this Author: Guitar Girl; Diary of a Crush: French Kiss, Kiss and Make Up, Sealed With a Kiss; Let’s Get Lost; Pretty Things; Fashionistas: Laura, Hadley, Irina, Candy; Nobody’s Girl; Unsticky; You Don’t Have to Say You Love Me; Top Ten Uses for an Ex-Boyfriend; Adorkable; It Felt Like a Kiss

Franny Barker’s best friend, Alice, is the worst girlfriend in the world according to the many boys of Merrycliffe-on-Sea. She toys with them, and dumps them. But she’ll never dump fashion obsessed Franny. Nothing and no one can come between them.

Not even wannabe rock god and sultry-eyed manchild, Louis Allen, who Franny’s been crushing on hard. Until Alice, bored with immature boys and jealous of Franny’s new college friends, sets her sights on Louis. Suddenly, BFF are bitter rivals.

Is winning Louis’s heart worth more than their friendship? There’s only one way for Franny to find out.

I nearly had a happiness heart attack when a proof of The Worst Girlfriend in the World was waiting for me at home one evening, but for some reason, I put it off. For at least a month and a half and I have no idea why. It was awesome.

Sarra Manning recently wrote an article for The Guardian about her love of stroppy, difficult girls that my entire Twitter feed fell in love with, and The Worst Girlfriend in the World is definitely proof of that. I have to admit that I sometimes struggle with difficult protagonists - I have to have a point of connection – but I immediately fell for Alice and Franny.

Franny is the kind of girl I’d like to be – she has a clear talent that she works incredibly hard at and her passion for it spills off of every single page. Her love of fashion and design and the statement that clothing makes is a huge part of her life, and I really wish I had that focus when it comes to clothes! But Franny also makes an important point – you don’t have to be academic to be intelligent, witty, worthy and talented. That’s just not the way it works. I hope that lots of girls with talents outside of academia pick up this book and realise that that’s okay; they don’t need a string of A*’s to be happy and successful and clever.

Then there’s Alice. As we get into the novel, there are plenty of reasons to dislike and berate her: she seemingly goes out of her way to hurt Franny, her anti-girl words and actions, her need to compete with everyone. But she’s actually just a scared, insecure and lonely sixteen-year-old girl reacting in the only way she knows how; in the only way in which she feels she can control the situation. She’s sixteen and she’s having a lot of feelings and that how’s dealing with them, in the same way that Franny deals with hers by making impossible leather dresses and obsessing over Edie Sedgwick, albeit a little more constructively...

A lot of talk about feminism and slut-shaming comes into this novel with Alice’s reputation. I love that recently I seem to be reading so many books that promote feminism as a vital thing that isn’t embarrassing or shameful – it’s necessary and so important for teenagers, especially girls, to know that and believe it. It’s with stories like The Worst Girlfriend in the World that I think could start to make that difference, or at least plant the seed.

The Worst Girlfriend in the World is an endearing, funny and touching novel about friendship, terrible rock bands and how, at the end of the day, it really is chicks before dicks.